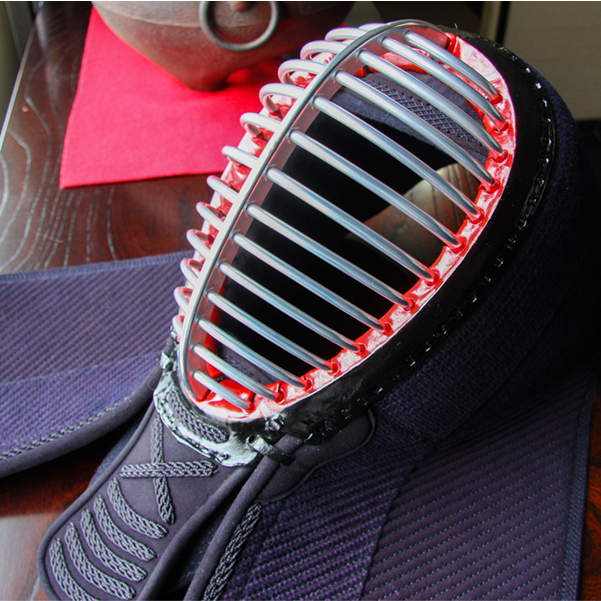 Machine stitched bogu, which make up the majority of all bogu, are stitched by machine in straight lines. The distance between lines of stitches on a bogu is generally the key feature used to distinguish what kind of bogu it is and what its attributes are. A 3mm stitch will make the futon or fabric of the bogu more dense and thus more resilient to strikes and also better able to keep its shape and create a beautiful silhouette.

A bogu with a tighter stitch pattern, like those of 3mm and 4mm, will however, often be lighter and more densely sewn. While this brings a bogu set many of the previously mentioned advantages, it also diminishes the absorption of impacts which will then be transferred to the person underneath. It may hurt. Bogu with a wider stitch pattern, like 6mm or 8mm, will be more likely to absorb these impacts for you and allow for a more comfortable experience during keiko. The downside to these styles is that they tend to be heavier and or less willing to hold a beautiful shape.

There are numerous varieties of stitch patterns that will affect both the appearance of the bogu as well as more practical factors. Many bogu will be given a cross-stitch pattern which can help to stiffen the futon, making it more resilient. There are also what is called naname-zashi styles. This literally means sideways stitching and is just as the name states, stitches which are made at an angle. These are often used on the men-dare portion of the men, which protect the shoulders of the wearer, in order to help create a more attractive shape. The naname-zashi will also often be paired with tighter stitching such as 3mm, to make the futon more prone to keep the wanted outline. This particular outline is what many in Japan will often compare to Mt. Fuji.

The futon, which is the blue material which comprises the majority of the bogu, is made of layers of cotton fabric and mosen felt. With pricier bogu this mosen will often be made of matted animal hair. Most bogu, however, opt for a more reasonable variety. With multiple layers of cotton and mosen the futon is then stitched, packing all of the absorbing materials down into the shape we are all familiar with. Therefore, when a bogu has a wider stitch pattern, the material is less compressed and as a result more able to absorb the impacts it receives.

Aside from machine-stitched bogu, hand-stitched bogu are also available. These will almost always come at a higher premium. The style of stitching done by hand creates a very different image than that of a machine stitched version.

The small square pockets created by this stitching style allow for the bogu to fit the wearer more easily and create a glove-like, ergonomic fit. Hand-stitched bogu are measured using the traditional Japanese system. This uses 分 or “bu.” A bu is equivalent to 3.03mm. Therefore, a 2.0 bu hand-stitched bogu will have a 6.06mm space between stitch points. The same impact absorption logic applies to hand-stitched bogu as it did with machine-stitched. The wider the stitch, such as 2.5 – 3.0 bu, the better the impact absorption. The square pattern of hand-stitched bogu will sometimes be given an extra stitch in the center of this square. This creates what is called “gunome-zashi.” It performs much the same role as tighter machine stitched designs to help keep the elegant Mt. Fuji-like shape of the men or for areas of the futon such as the men-dare or used to beautify other portions such as on the o-dare of the tare.

With such a wide variety of bogu out there, discerning what to get can often be a bit tricky. With this knowledge of stitching and what the numbers mean and how they perform will hopefully help to give kenshi a good idea of what they are looking for, and what they should expect from a bogu. Getting a new bogu should always be a fun and enjoyable undertaking, and understanding what comprise bogu will help keep it that way.