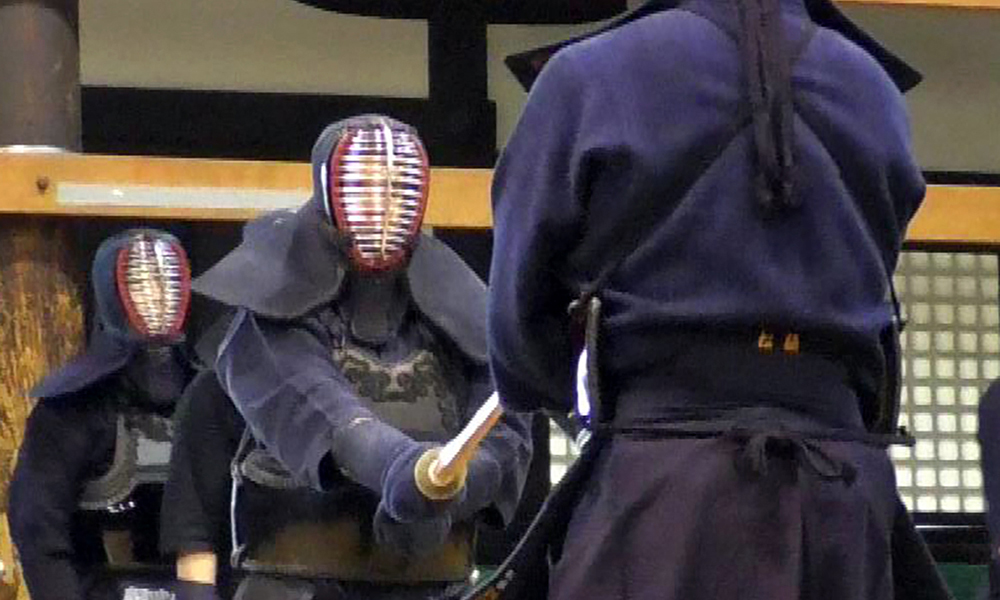 One day before the Swiss Kendo Championship, I received the email from Tozando that I have won the Trip to Japan. I couldn’t believe it and needed a weekend to realise what happened and that I should give my conformation for the trip. During the whole Kendo weekend, I thought about how lucky I was to win a trip to Japan by ordering some Shinais.

As my boyfriend is also a Kendoka, I asked Tozando if he can join me on his own coast. They were so generous and welcomed us both at the Kyoto Station in the beginning of December. Sato san picked us up and organised the trip. Many thanks to him and the whole Tozando Team for their warm and kind manner.

Directly after the arrival we could visit the Tozando head office with the great shop and the show room, with its beautiful bogus. When you cross the show room you can go on the roof of the building, the view over Kyoto from this point is very special and great. It was a nice start to our stay in Japan. After a delicious ramen soup, we had a bit time to visit the shop and to try out some new Shinais but we were too tired for more and went to bed very early.

We could stay in a traditional ryokan near the Tozando head office. The ryokan and the Tozando shop are located centrally, therefore the sightseeing tour the next day could be done comfortably by foot or with the bus. We were lucky enough to visit the Imperial Palace and the Castle. Especially the Imperial Palace with its magnificent gardens and impressive architecture was an eye opener.

After the sightseeing tour, we had the opportunity to practice with the Tozando team and some guests from china at the local budo center of Otsu. This common Jigeiko was the perfect opportunity to get to know each other a little bit better through kendo and was a good start into the evening. After the practice, we were invited to a party to the house of the president of Tozando. There we had the opportunity to eat some very delicious Japanese cuisine, taste some exquisite sake and chat about kendo with Nishimura san and Kiwada san, both very famous kendoka. We would like to thank Mister Kimura and his wife for their outstanding generosity and hospitality.

After a short night, we were very excited to leave the ryokan and head out to the famous Butokuden Dojo for the Tozando Renseikei. The whole day was dedicated to kendo, as we could participate in the morning, as well as in the afternoon session. Both sessions were attended by a lot of motivated people and the overall energy was very positive. Especially the many kids had a great spirit. Before the jigeiko with the senseis, the current Japanese Kendo Champion Nishimura Hidehisa gave a short training about his way of practicing and his signature attack, the kote. His inputs could not only show us a different approach on seme, but also combined nicely basic kihon practice, preparation for competition and the attitude in your everyday practice. After the training, we could do jigeiko with all the senseis. The line-up was very impressive, as well as their kendo. We are very happy about this unique opportunity!

After the second kendo session, Sato san had a big surprise for us. He could manage to organise us two tickets for the Kabuki theatre the next evening. Thus, after a day of sightseeing, shopping and good Japanese food, we had the opportunity to attend a kabuki performance. The four different pieces lasted 4.5 hours and were just amazing. Especially the last play, about a sake drinking demon was mind-blowing and thanks to an English audio guide we could understand some deeper details of the performance. What a perfect last evening for our stay.

The next day, we already had to leave early in the morning. We arrived at the Osaka international airport and thought our stay in Japan would end soon. But because of heavy snowfall in Europe, our flight was cancelled and we had to stay one night longer in Osaka.

By writing this short summary, I realise how many impressions we received and how many friendly and nice people we met during this short week in Kyoto. Thank you very much to everyone who made this possible.

Written by Veronika Orasch (Switzerland), winner of the 10th Edition of Tozando’s “Win a Trip to Japan” Experience.