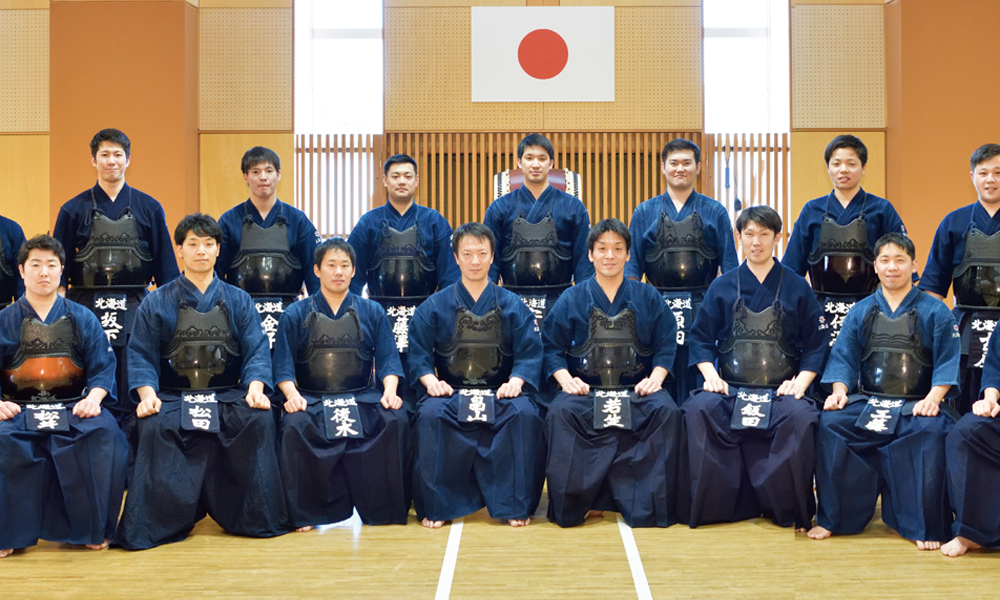 Recently, Hokkaido Police are threatening to dominance of the top 3 powerhouses of the Tokyo Metropolitan Police, Osaka Police, and Kanagawa Police. Hokkaido Police boats players like Mitsuhiro Jishiro and Sho Ando who have gained high standings at the All Japan Championship. What kind of training do they do at their special practices?

With the 48th All Japan Championship winner Naoki Eiga being the highest achiever, Hokkaido police has regularly produced players like Daisuke Wako, Mitsuhiro Jishiro, and Sho Ando who eye the No.1 Japan spot from the northern lands. Most of the special training team are from Hokkaido, and have spend most of their lives in their homelands.

Hokkaido is also home to many high schools with top national-level coaches such as Kazuo Furukawa of Tokaidai Daiyon High and Yutaka Saga of Sapporo Nichidai High, Each instructor sows the seed for future growth, and many who have seen those seeds bourgeon during their university kendo days enter the fertile lands of Hokkaido Police to see their skills blossom. This great flow is no doubt part of the strength of Hokkaido police.

The current Hokkaido Police Special Training Team is led by head coach Daisuke Wako (2nd at the 56th All Japan Championship) and coach Hatakeyama Takushi, working hard every day in training to win the All Japan Police Games 1st division. They fulfill all their duties as police officers while taking on the large prefectures head-on. The practice of the Special Training Team seems quite orthodox if you look at the menu, but the motivation of the players makes it an extremely tough practice, and one that really makes you stronger. Below we will introduce the contents of the practice and what the training team members have in mind during practice.

About Training at Hokkaido Police

At the Hokkaido Police training, we don’t have any especially new menus. It’s an orthodox style of training, but each member of the team participates with a high level of motivation, so naturally they gain the ability to battle at the national stage.

Even though training contents are orthodox, one characteristic is that there is a great focus on the air-swings, striking practice, and turning practices which are at the beginning of the training sessions. We are conscious of putting all our energy into training right from the start, and that allows us to perform the ensuing basic practice, skill practice, kakari practice, and ji practice all at a high level.

Teamwork and mentality. Playing in div 1, we feel that whether in div 1 or div 2 it is always very tight. Recently we have gotten good results in div 1, but we always tell the players that  “we just got lucky”. If we let our guard down we will drop down to div 2 in no time, but on the other hand if we can build upon this further we could win the whole thing. That is why in each practice players must think what they lack, and aim to train those areas. The head coach and all below, including all the Special Training players put their thoughts into practice.

Things you are mindful of during practice

To imagine real match situation, whether it’s basic training, peer-peer training or instructor-lead training. How will your opponent move in this situation? If you strike will your opponent be able to counter? In this timing are you at an advantage? We think those things to minute detail during training. In recent kendo, if you concede an ippon early, it is not easy to get two back. We believe it is important to enter the match thinking it is a one-point battle. Also, being Hokkaido, geographically, we don’t often go to other prefectures to ask them to train together. So it is important to improve the quality of our everyday training.

What are you (Jishiro) mindful of I order to grow as a player?

I think it’s important to clarify your goals. Not just go through the motions in training, but to take each step toward your goals. That will allow you to check your growth. Maybe you want to win the All Japan Championship, maybe the All Police Championship. What do you need to do in order to achieve those goals? When that becomes clear, your achieving that goal simply lies behind each step you get through.

When doing air swings, we are mindful of the gap between your feet. You use your whole body to step out with your right foot, but for your balance to not collapse, you must slide your left foot forward quickly. For the upper body, we are mindful to use our shoulders strongly so the swing doesn’t become small.

Then we let then edge of the sword fly, and practice the swings one by one. By always doing the air swings while imagining an opponent in front, it becomes not only a warm-up exercise but something that is useful in real matches too.

At Hokkaido Police we have 3 types of striking practice. The first is a big men strike. You use the whole of your body, and try to wait until the very end to raise the edge of your sword. After striking the men, we are mindful to slide our left foot forward quickly so the strike will gain a longer reach, and then to pull out of the strike quickly. When striking from a one-foot-one-sword distance, we strike first without dragging the foot forward, and after striking we turn around quickly and prepare a posture for striking out again.

For the small men strike, because the strike is small you need to compensate that with your bodily momentum and the closeness of the body to get striking power. As with the big men strike, the key is how patient you can be in raising the edge of your sword.

As the same with striking training, there are 3 types of turns that we practice. First is the regular turn, and as it is often said, we focus on getting the whole strike from the first forward strike until the last forward strike all into one strike, and to straighten our joints and strike as if we are chopping off body parts.

Specifically, we try and swing the shinai strongly using the shoulder, elbow, and wrist. The turns we do from clashing the bodies 3 times is to build up bodily strength. We focus on not losing our bodily balance. The back-and-forth turn is done in one breath, and we train practically to catch our breath.

In basic practice, we go through all the skills including men, kote, do, tsuki (lunge) and consecutive moves. If someone wants to practice a particular skill more repeatedly, he can let his partner know and focus on that.

What I try to value is the energy before attacking. You raise your mental level by letting out your voice, and that leads to the strength and accuracy of your skills. If you simply strike the area that your partner leaves unguarded, it becomes practice for the sake of practice and will not lead to success in real matches.

Rather than starting from a one-foot-one-sword gap, it is important to start from afar, focusing on the exchange of attacks, and when the gap narrows down to striking distance to pull of your attacking moves and win. Even though we call it “basic practice”, we believe it is important to train with the mentality of aiming to pull of each and every strike within limited time.