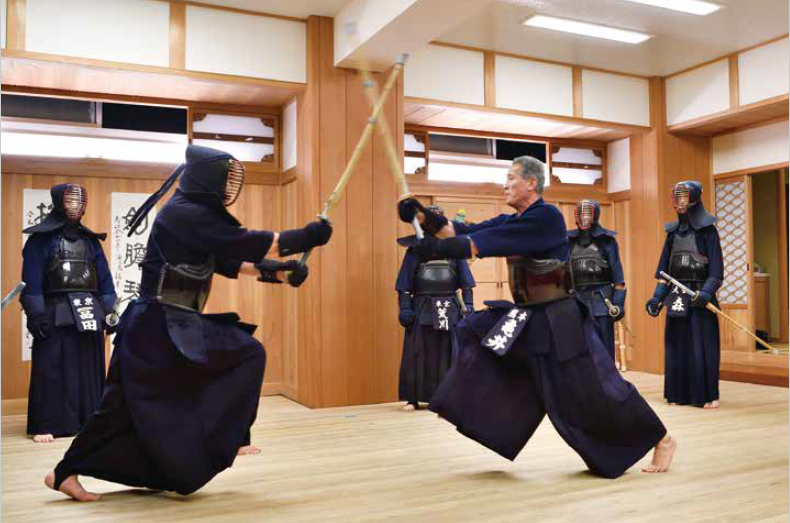 The first basic things I learned in elementary school kendo are what I continue to do to this day.

The first sensei who taught me kendo became my own base. I began kendo in the 4th grade while attending Konora Elementary School in Misumimachi, Kumamoto Prefecture. A 2nd or 3rd dan sensei by the name of Nakagawa Michito taught me the basics. Though he has already passed away, in my mind and in my body, the basic things I learned from him remain. I believe still that these were the most correct and fundamental rules of kendo. For the first six months, all I did was sit in seiza and watch the more experienced students, then I would go into the hall and practice suri-ashi. After this came how to hold the shinai, kamae and posture, suburi, zenshin-kotai suburi, sayu-men – I learned the most basic of the basic from this sensei. Though I can’t say that I remember learning everything then clearly now, I remember doing everything he taught me just as he had said to and that even now I continue to practice those things today.

In competitions as well, our elementary school was either first or second in the entire prefecture. Misumimachi was just across from Amakusa City. Though it is very rural, there are several famous kenshi that were born in the area. Even when competing, I don’t remember ever being taught how to win in shiai or how to strike in order to get an ippon. We only learned the basic strikes – men, kote, kote-men, do. This is also how simplistically I thought about it. I felt that he was the only one that could teach me kendo, this was the only place I could learn kendo, and if I didn’t absorb all that he taught me, I would never get any stronger – for some reason in heart and mind it was this pure to me. It was with this sincere heart and mind that I continue to practice kendo to this day. There were curves in the road before arriving at who I am today, but I believe the kind of kendo I wish to do has not honestly changed since that time.

Yet, I wouldn’t say that other students shared this habit of practice through elementary, junior, and high school. So, the reason for my staying so consistent in the way I practiced was due to me being simplest among the simple in this rural area. Honestly, that may be the best way to say it! (Laughing) However, when I entered Seikai Junior High School, the coach there once said to me, “Kamei, don’t think you’re going to win by looking pretty.” I had no idea what “winning by looking pretty” meant and I recall asking this. My junior high school sensei was the complete opposite of Nakagawa Sensei and I don’t think I ever did any of that. I do remember, however, that the School Superintendent for Misumimachi, who also did kendo, told me, “Toru, you keep doing things the way you are. Keep doing it that way.”

The basic strike in kendo is a single, rhythmic men strike. The movements of kendo are simply taking up a kamae, raising the shinai, and then lowering it. At the same time in unison you raise the right leg and lower it. That’s it. Of course, there are responsive strikes and other things, but the basics are this single rhythm men strike. It is simply a matter of whether it will become a men, kote, do, or tsuki strike. When I give instruction at any of the many places I attend, this is the first thing I teach. I instruct adults in the exact same way. However, If I ask someone to do a basic men strike, I could say as many as 99% will first pull there left foot forward before they move the right foot to make the strike. This is currently a problem that has greatly affected kendo. This has nothing to do with age and extends even to instructors. It happens the most frequently when doing basic strikes.

This basic movement begins in the chudan kamae with the right hand and right foot forward. Therefore, when the movement begins, it should obviously begin from the right foot. However, many people begin by pulling the left foot forward so that they are able to move further forward. In doing this, however, the strike no longer has a single rhythm. As this is an applicable technical skill, I can’t say that it is simply wrong. However, fundamental strikes are made in a single movement. Explaining why it is better not to move your left foot first to a young person is difficult, but I do so like this – Doing so will help to strengthen your left leg and this will lead to more power when jumping. I also have another way of explaining it. Bringing your left foot forward becomes a signal to the opponent that you are going to strike. This will make striking your debana easier for them to aim at and lead to you being struck.

Even when I teach this, perhaps because it has become a habit, they always revert to how it was before. The practitioners who attend the dojo or gasshuku I teach at regularly have all stopped moving the left foot first because I am so insistent. There are some whose calf muscles have grown two or three centimeters in size. The fact that I must theorize about why incorrect kendo is not beautiful or why one should make strikes with a single rhythm is actually quite sad. If you’re going to do kendo, doing the basics zealously is obvious. This is something I have always practiced and take pride in.

Putting it another way, if the state of kendo has become so poor that we must constantly tell people to do the basics correctly, then this is something that we must do our absolute best to fix. I want people to think that if they are going to make light of the fundamentals of kendo, then it is the same as not doing kendo at all. There are applications for things like tsugi-ashi, ayumi-ashi, katsugi waza, and suri-age waza. Yet, the foundation for all of these applications lies in the fundamentals. So, doing kendo without the basics being central or doing a kendo that does not recognize the importance of these fundamentals, is a kendo that lacks any kind of starting line.

There are many people who are looking for results without a starting line. If you do these unorthodox waza or sly waza then you may be able to win in a shiai. However, even if you are going to use these waza, I would like for them to use them upon having polished the basics well in order to become a well-rounded practitioner. I really don’t want them to run immediately to these types of waza. But, when you are in a shiai, you feel that you must win. So, how are you to win in a shiai while also doing faithful, correct, and beautiful kendo? Simply put, you have to do many times more keiko than the others. This is what I believe to be the only way.