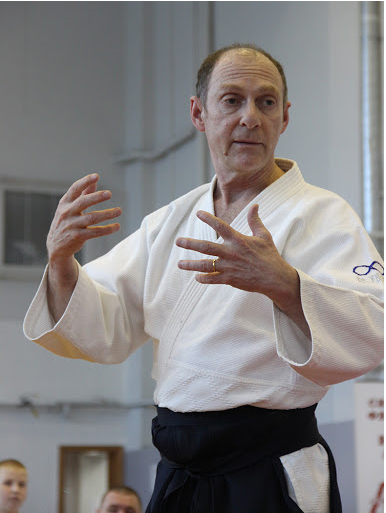 An Interview with a Master: Part 2.

Q: He must have been a very interesting person. To just meet somebody for the first time and just say “Come in” like that.

A: Yes, it is incredible the way he could judge someone just by feeling. He was very instinctive.

Q: I really want to hear, because you say you first saw Shioda Sensei on a film back in France, what was it that fascinated you to go find him?

A: first, I was training in jujutsu, so my image of martial arts was very big young guys with a lot of power. This guy was in his 60s and throwing people just by having good timing – and he was laughing. It was just so different from the image that I had of martial arts.

Also, it was kind of electric. The power just came forward like an animal or something. He was not athletic. He was something else. He had some kind of energy I didn’t know, so I wanted to find out more about that.

Q: I have seen a lot of these videos, and it is absolutely amazing how he moves. It is just “boom!” and then everybody is falling over.

Next I would like to ask how was the uchi deshi life for you. What was your experience like being an uchi deshi.

A: Actually, before I joined the program in Japan, I was in the army for military service for one year. It was very similar because it is living in a community and a lot of strict discipline, so that part was quite similar.

Of course, for me, as I had never done aikido before, almost all the movements were completely new. And I thought it was crazy how you can do all these kinds of movement, it didn’t make any sense, but because I came from so far and there was no way to give up… And there was no time to ask questions really, you were so busy just training and you had so many things to do, like cleaning and looking after the teachers, so from the time you got up in the morning until night you didn’t have time for yourself… it just went very fast like that. Also, exhaustion, you just train and you clean, and you sleep and that is it, and the day goes like that.

Q: In your book you write about this hard training and hard life, and I was wondering why didn’t you ever just say this is enough I want to go home?

A: It was not easy to come to Japan because at the time there was no internet, there was no news or anything. You did not know anything.
There was just this movie and nothing else, and I knew the name, so it really was an adventure too.

At the time I was living in Reunion Island, so when I went to buy my ticket the lady at the travel agency did not want to sell me the ticket.
She said she did not want to take responsibility to sell me the ticket, because she had never done that before, nobody from Reunion had gone to Japan before so she could not do it. So, I had to come with my parents, to buy a ticket.

And when I arrived in Japan, I did not know anybody except for one Japanese student that I had met in France. I did not have any address or anything, so it was really an adventure to find Shioda Sensei. I did not want all that effort to go to waste, and you know, I wanted to train with Shioda Sensei. So, I would never give up, that was my plan. No matter how hard or how difficult I would stay and not give up.

And you know when you are young and a little crazy.

Q: It is something many young people will have a hard time understanding just how much it actually took just to get to Japan.

A: Yes, it is crazy, because if you look at the circumstances, I didn’t have much money and I didn’t know anybody, I didn’t even speak English, just French, so it was an impossible mission.

Q: You had a period of about five years as an uchi deshi at the Koganei Dojo under Shioda Sensei.  You then went back to France for a few years and came back as an uchi deshi again. I am really interested to hear what made you chose to come back?

A: After five years of very intensive training, I was getting a little in the routine and I wanted to see what I could do with all the knowledge I had. How I could put that into practice in normal life and especially in France.

So, I went back to France, that was my original plan. But, when I came back to France, I just realized that it would be very difficult. First there was only a very small Yoshinkan organization in France. When I tried to open a dojo I got into a lot of political problems because, in France at the time they had a lot of regulations and everything was very strictly managed.

I realized it would take me a very long time just to go through the administration, and I would never be able to grow or to do anything of consequence. So, I went to England because the Yoshinkan was quite big in England at this time, and they asked me if I could be in charge of 7 or 8 dojos they had in London. So, I became the technical director for them.

In the morning I would work some part-time jobs, and, in the afternoon, I would drive to all the different dojo and teach. And in the weekend, I did a kind of special course for them. I did that for about a year, and then in 1988, Shioda Sensei went to Germany for his last seminar and demonstration, it was huge. At the venue there was so many people pushing to get inside the room that they were getting very close to the mat.

I spent a week with Shioda Sensei and after that I talked to him and I said that I had studied for five years in Japan, but now I was kind of lost because I did not understand anything, and I could not make the techniques work. Yes, I was teaching but I didn’t really have any confidence. So, I asked him for permission to come back and study again, and he just laughed and said “yes”.

So, I went back to England to say goodbye to everybody.  I then moved back to Japan and I started training, but this time it was a completely different. Shioda Sensei was older and I already had some experience. I changed the way I was thinking and training to just focus on him and what he was doing.