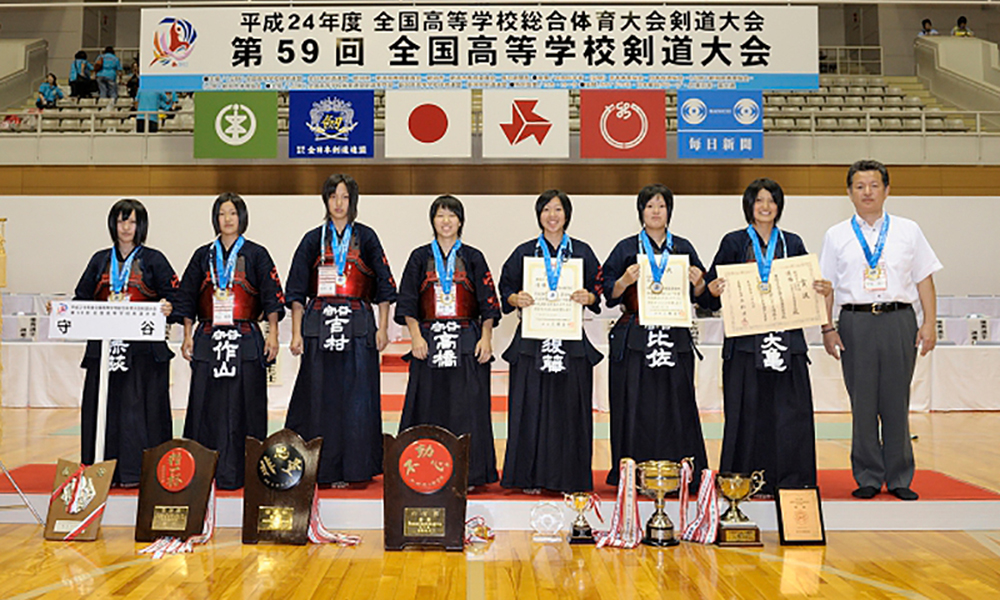 Not giving up at 0-2 down, catching the flow for a great comeback win

The 2012 Inter High Girls team final was between defending champion Moriya (Ibaraki) and Nakamura Gakuen Girls (Fukuoka) who were gunning for their first title. In the pervious year, Moriya had taisho Moeko Takahashi, who also won the individuals, but this year they had a change in team members. The taicho, An Ogame, had experience in the previous year’s Gyokuryuki games, but it was her first time at the Inter High games. On the other hand, Nakamura Gakuen Girls had one the Nationals in the spring, the Gyokuryuki Games in July, and were progressing toward their first inter-high win.

Nakamura’s Year 2 taisho Nanami Onishi, and Year 3 fukusho Mai Imamura, were rock-solid as they announced their arrival at the final undefeated up until the semi-final. Moriya, on the other hand, had problems with their backbone player Ogame losing twice in the group stages. Sempo Chihiro Goto and others at the front had pulled the team forward, and in the knockouts Ogame managed to up her game too.

The final progressed with Nakamura firmly in control. The sempo, Yu Sugita claimed a kote in extra-time for the win, and jiho, Erika Anekawa came from a men down to grab two mens for a comeback win, bringing their team one step away from the coveted title. The chuken match ended in a draw, but many in the crowd would have assured themselves of a Nakamura win with two of their rock-solid players still in the deck. But Moriya fukusho Minori Takahashi claimed a straight men early on the defeat Imamura with an ippon, and taisho Ogame drew the flags-up when she returned an opponent men-attack to claim a men.

An uneasy atmosphere ran across the arena, Ogame kept attacking to try and claim the nihon, but Onishi worked hard to keep up and see the time run out. Now it was down to the daihyo match between Ogame and Onishi. The flow was now with Moriya, and Ogame rode it as she returned Onish’s men-attacjk with a do 23 seconds in. At this moment, Moriya had claimed their second title in as many years.

“Ogame was able to win mentally.”

The flow and mentality – these factors are surely important in adult matches, but in matches between teenaged high schoolers, it can affect the outcome more than skill. It was a match that vividly showed how scary one match can be, and how small factors can influence the final outcome. It often takes a long time to claim the first championship win, but a coach who experiences one win often goes on the win the second time and more.

This was the 4th championship win for Moriya. Nakamura had won many titles in the Gyokuryuki Games and the Spring Nationals, but had no inter-high titles at this stage. It would take them another 4 years to claim their first inter-high win. The following year, these two teams would face each other again in the inter-high final, with Nakamura Gakuen Girls seeking back-to-back titles.