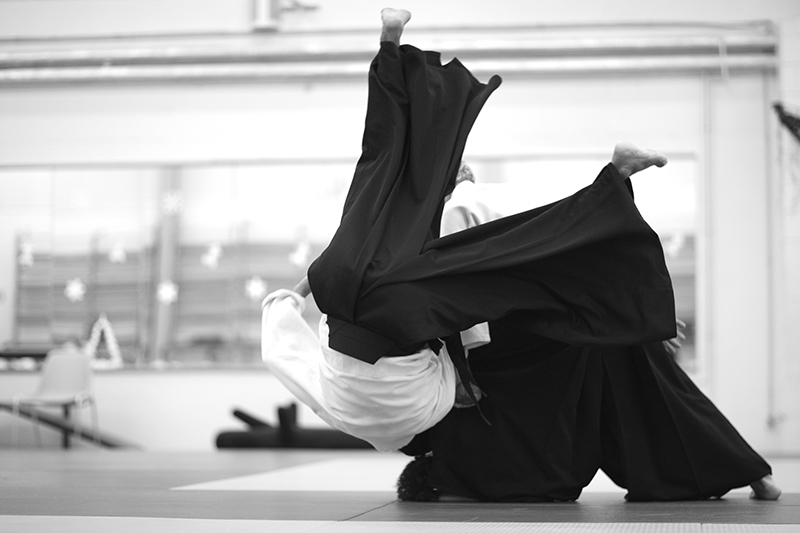 At first glance Aikido can seem like one unified martial art, but this is far from the case.  Aikido is in fact comprised of many styles – each one emphasizing different parts of the founder Ueshiba Morihei’s Aikido.  For someone looking to begin Aikido or even someone well-versed in a particular style it can be confusing to distinguish the traditions from each other.

We believe that part of Aikido’s strength is not only it’s variety of interpretations, but also their vitality.  Ueshiba continued to develop and hone his art throughout his life; many of Aikido’s styles derive their characteristics from the founder’s Aikido of the time – often being taken by prominent students who resonated with a certain aspect of Ueshiba’s teachings.

In this article we are going to take a look at three prominent styles of Aikido – Aikikai, Yoshinkan, and Shodokan. Briefly looking at how each one was founded and their unique characteristics.

Aikikai is regarded by many as the style that inherited Ueshiba Morihei’s final Aikido.  It operates out of Kodokan, the honbu dojo that Ueshiba founded in 1931.  It is now lead by his grandson Ueshiba Moriteru, its second Doshu (Master of the Way).  The Aikikai as an organization was recognized by the Japanese government in 1940, with Ueshiba Morihei being directly involved until his death in 1969.  This means that as he kept developing his Aikido so too did the styles taught by Kodokan’s many teachers develop with him.  This has resulted in Aikikai Aikido being regarded as orthodox Aikido; true to the spirit of Ueshiba’s martial arts, but also featuring a very diverse array of technical styles – reflections of the many interpretations of successive teachers.  One commonality throughout though is the focus on non-competitive and inclusive practice; reflecting Ueshiba Morihei’s distancing from the martial traditions that founded his art and instead emphasizing cooperative practice and self-improvement with peace and harmony being the ultimate goal.

Yoshinkan Aikido is sometimes called “Hard Aikido” often in comparison to more orthodox Aikido.  It was founded in 1955 by one of Ueshiba Morihei’s students – Shioda Gozo.  Shioda Shihan began his training with Ueshiba in 1932 and trained under him for eight years.  Due to this pre-war training Yoshinkan aikido resembles a lot of the pre-war Aikido and is therefore a lot closer to the koryu techniques from Aikido is derived.  Shioda Sensei’s subsequent experiences as a soldier and then founding his dojo separately from Ueshiba emphasizes the “hard” nature of this style.  It is wrong to view this as a schism as both styles developed independently in the difficult times following World War 2.  Today Yoshinkan is famous for its association with Tokyo Metropolitan Police and its honbu dojo’s intensive one year training course.  Whilst sharing the same roots and principles as Aikikai aikido, Yoshinkan’s philosophy is a lot more confrontational and martially minded; however it remains committed to non-competitive training and does not feature sparring.

Shodokan is a style of Aikido founded by another of Ueshiba’s pre-war students; Tomiki Kenji.  Tomiki Shihan studied with Ueshiba Morihei from 1926 through the pre-war period, but also trained under Judo’s founder Kano Jigoro: receiving his 8th dan in Aikido in 1940 and his 8th dan in Judo in 1978.  He founded Shodokan officially in 1967, but it was most likely developed earlier through his work at Waseda University as a professor and teacher of both Aikido and Judo.  The influence of Kano’s methodology behind Judo’s inception can be clearly seen in Tomiki’s Shodokan Aikido – of particular note is the styles emphasis on developing techniques through competitive sparring.  This is something that has put the style at odds with many other Aikido styles.  From Shodokan’s point of view, competitive randori allows one to test their own skills against fully resisting opponents across a variety of contexts.  This works in harmony with kata to establish a way of learning based on strong theory and rigorous practice.  It is a common misconception that randori competition is the objective of Shodokan Aikido, in fact randori training exists to reinforce your everyday training, much like jigeiko in Kendo.  Competitive shiai is not a requisite.

Aikido is a very deep martial art – though viewed as modern budo it has its roots in Daito-ryu jujutsu.  Today, it has been developed across generations and through very tumultuous periods of history resulting in a vast array of interpretations based upon its founding principles.  Looking at only three of Aikido’s styles we can see how diverse Ueshiba Morihei’s teachings are.  Perhaps as practitioners it is interesting to see what differing styles offer and how their principles can inform our own practice.