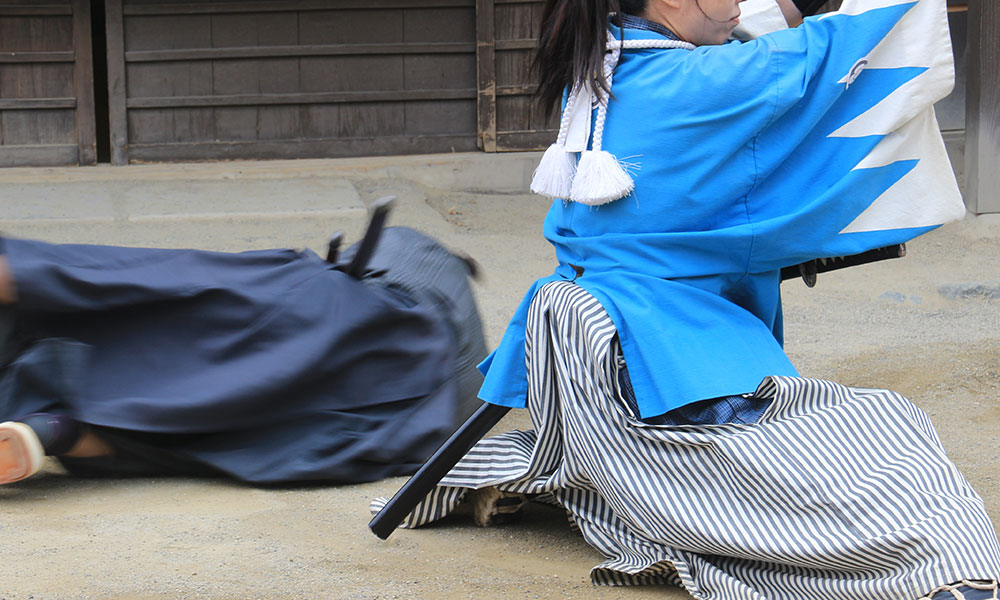 On the night of July 8th, 1864, a stream of white and light blue haori jackets emblazoned with the kanji 誠 (Honesty) moved toward the Ikedaya Inn. It was situated just east of the famous Sanjo Bridge in the heart of Kyoto and these were the jackets of the famous Shinsengumi police force. Their target was a group of southern samurai conspirators who had gathered in the inn for the night. After having tortured Furukawa Shuntaro – a samurai sympathetic to the conspirator’s cause – the Shinsengumi had obtained the information needed to move in on the group.

This is the backdrop for one of Kyoto’s most infamous swordfights in the more modern era. The Ikedaya Incident began as intel was gathered by the Shinsengumi that would seem to implicate many of those samurai in a plot to set fire to the old capital. Kyoto at the time was rife with such samurai, calling themselves shi-shi or “men of high purpose”, who supported the ‘Sonno-Joi’ movement which advocated the political empowerment of the emperor and the expulsion of foreigners and their influence. The Shinsengumi amounted to a secret police force with very little in the way of red tape. It was sent by the Tokugawa Bakufu from Edo and given the unenviable task of controlling the situation in the south. In many cases this control equated to an iron fist and steel blade.

They were led by Kondo Isami, a very stout individual skilled in Tennen Rishin-ryu and who was known for not being one to shy away from confrontation. Though it is said that he would often lose bouts with practice swords, his ability to remain fearless when the stakes were much higher made him a very accomplished practitioner when holding a real sword. He was clad in more than just a sword for this event. He famously wore a steel helmet and upper body chainmail armor.

Many members of the group have become cultural and pop-culture icons in Japan. They can be found in countless novels, films, manga, and videogames. Nagakura Shinpachi, Hijikata Toshizo, Saito Hajime, Okita Soji, and about thirty more members split into two (or three) groups that made up the Shinsengumi force. Kondo Isami led the first group of ten men, while Hijikata Toshizo also known as 鬼の副長 (oni no fukucho) or “the demon vice-commander”, lead a second group of 24. This group was split into two subgroups for ease of movement.

Kondo’s ten men arrived first and surrounded the wooden, machi-ya style inn, guarding both the front and back exits. Kondo and two others moved in at pace giving only the now famous proclamation “Shinsengumi! You’re under arrest!” Screams could be heard from among the large number of men on the second floor. “It’s the Shinsengumi! They’re here!” In a stampede of movement, the surrounded samurai clamored for the weapons as Kondo and his men continued to rush in and up the stairs.

Photographs from around the time and recreations of the inn show that the interior was quite restricting. The stairs also, steep and narrow, made for very confined combat. Famous images from films that have become standard when recreating this scene include a single samurai rolling down the stairs after Kondo Isami preemptively began the engagement by mercilessly cutting him down. The image may be one of cinematic imagination, but in reality, the violence that followed was very real.

The engagement started without the intention of taking prisoners as Kondo’s men were heavily outnumbered. However, as Hijikata’s groups arrived and helped to even the numbers the goal changed from ‘cutting them down’ to ‘making arrests’. Either would mean the same fate for the samurai from the south and so many tried to flee. Two individuals, Miyabe Teizo and Matazoe Kitsuma chose to commit seppuku instead. The rest fought on and the fray spilled outside where onlookers began to gather to witness the spectacle.

The fighting spread out in front of the building and even on Sanjo Bridge. One finial atop the modern bridge is an original from the period and bears a cut from a sword strike that was off its mark. Of the original 44 or so samurai who had gathered in the inn, around ten including the two who took their own lives died at the scene. Another eight of the men were actually able to completely escape. Two more committed suicide following the incident, while the rest were captured and arrested. Many of these men were later executed.

The Shinsengumi lost a single man the night of the event, though two more men later died from injuries they had sustained in the fighting. For the Shinsengumi the fight would actually continue as they methodically hunted other Choshu and Tosa Shi-Shi Samurai throughout the night and into the following days and weeks. Family members of many of the Shishi Samurai were arrested and other events occurred as a direct result of the Ikedaya Incident.

One Shinsengumi member who took part in this incident as well as many others would end up fleeing to Hokkaido after the fall of the Tokugawa government. Nagakura Shinpachi began teaching Shinto Munen-ryu kenjutsu and then later in his life taught kendo at what is today Hokkaido University.