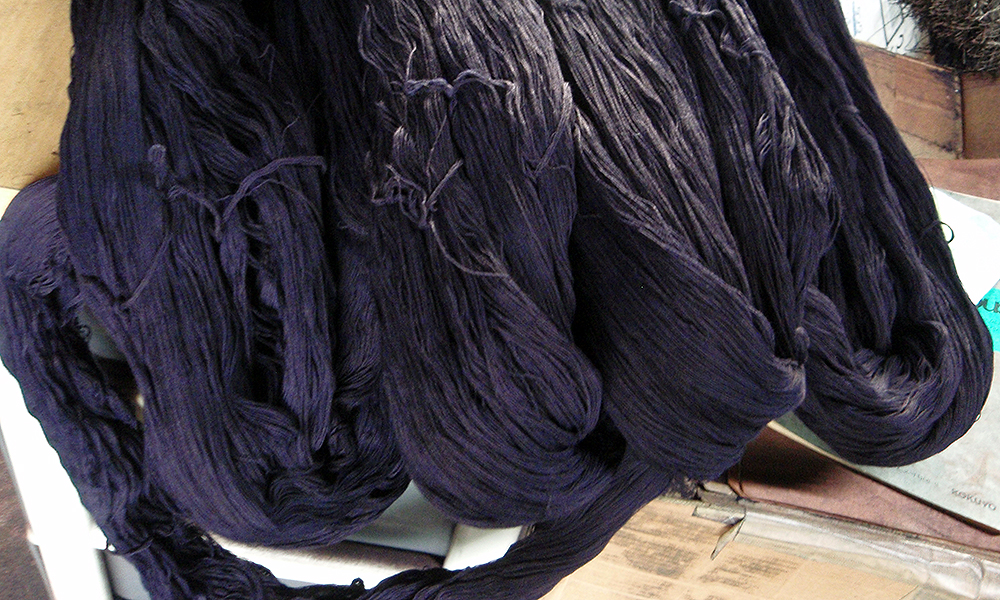 Are you avoiding Sho-aizome(genuine indigo dye) for fear of fading?

The Ai (indigo) color is used not only in Kendo equipment but has been used throughout Japanese culture. Its deepness has naturally blended with the Japanese lifestyle. There is a saying; “Blue comes from Ai and is bluer than the Ai”. This refers to the blue color extracted from the Ai-grass, noting that its color is more beautiful than the color of the Ai-grass itself. This is applied as a idiom to refer to an apprentice surpassing his master.

Ai is possibly the oldest plant dye used by humans, and is the natural world, at least among plants, it is the only things that gives a naturally blue color. It was about 1400 years ago, during the Asuka period that Ai arrived in Japan from Indochina via China. The oldest use of Aizome (dying with Ai color) is the silk string “Ray of Enlightenment” used at the Enlightenment Memorial Ceremony of the Daibutsu (Big Buddha) in 752. The string is kept in Shosoin.

From Asuka (592-710) to Nara period (710-794), the blue from Aizome was used for the second rank of the Twelve Rank System, and was used in silk material worn by the aristocrats. By the Edo period (1603-1867) it had reached the commoners and was used in ordinary clothes, work clothes, shop curtains, and flags. The town of Edo was full of Ai, the the Ai-color became known as a symbol of Japan. British chemist Robert William Atkinson came to Japan in 1875 and lauded it as “Japan Blue”, and Lafcadio Hearn, who arrived in 1890 wrote that Japan was a country full of magical blue.

Ai has positive effects of sterilization and stopping blood. Cloth and paper dyed in dark Ai repels bugs and is used for work clothing like farm clothes and Tabi (Japanese socks). Aizome underwear and socks were high valued as they were believed to have sterilizing effects against sweat and heat rash and against skin diseases. Cloth that has been dyed with Ai over and over again is resistant to fire and retains heat well which led to Ai being used for travel wear and firefighter clothes.

The indigo, which is the color of Ai, does not give its color in its first dye, but with repetition the material gradually becomes deeper in blue. The Ai starts off from a light, greenish blue and gradually turns into a purplish blue. The Japanese described the beauty of multicolored appearance of Ai as “The 48 Colors of Ai”.  A light blue mixed with white is called “Ai-shiro”. With slightly more blue, making it like the root of spring onion, and you get the color named “Asanegi”. An even deeper blue is called “Hanada”. Still deeper and you get “Ai”, and the next level up is “Kon”. A slightly bluish Kon is called “Shikon”, and a deeper level of Kon is called “Nokon”.

The color right between Ai and Kon is called “Katsu-iro”. The Kanji for this is now read as “Kasshoku” and is used for a dark-brownish color, but in the past this was called “Katsu-iro” or “Kachi-iro”, referring to a bluish color. This was precisely the color used in armory. The word sounded like “katsu (winning) iro (color)” and was thus used in protective gear and practice gear. For the samurai, for whom winning was everything, wearing as many Ai things as possible he, perhaps, thought he could increase his winning percentage even by a small fraction. When we think of it this way, creating Kendo equipment from with Ai color makes sense both superstitiously and practically.

Interestingly, recent research has shown that Ai can reduce carbon monoxide and prostaglandin which can be caused by stress. It also contains the antioxidant polyphenol and the antibacterial tryptanthrine (regarding polyphenol, 10 times more kaempferol than spinach).

The raw leaves of Ai are bitter but also tasty, and if you cut it with a knife it will be sticky. It can be used in cooking or eating, or drying it as using it for Ai tea. Ai powder made from the plant is also being sold.