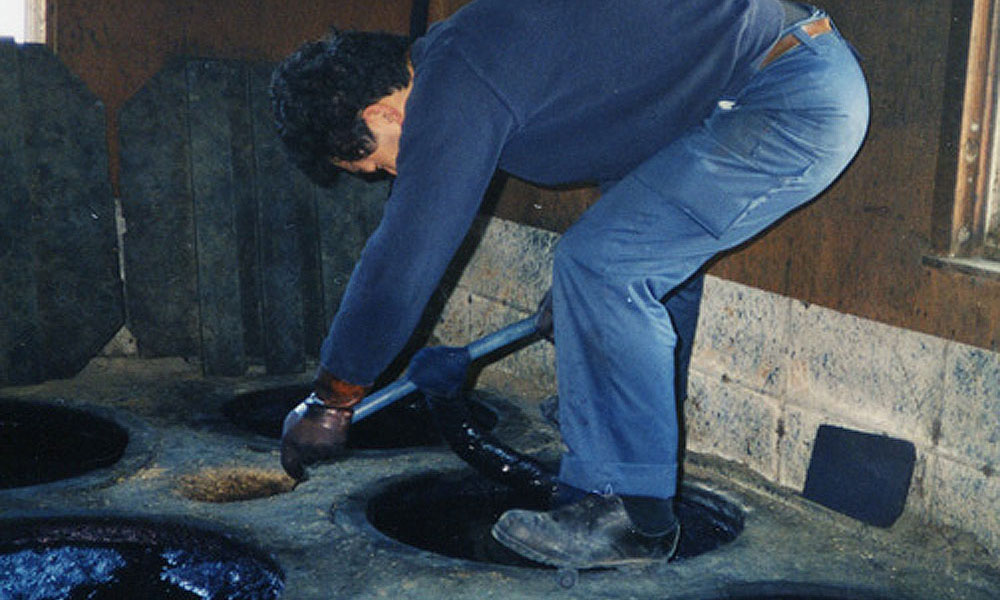 Why are Bogu dyed with Indigo-dye?

Bogu are traditionally dyed using Aizome (indigo-dye) and in the past Aizome was something that the Japanese people could find all around them, the indigo-dyed color being a natural part of their everyday life. The famous Edo period Ukiyo-e master Andō Hiroshige, best known for his landscapes, made great use of the different shades of indigo to vividly depict the scenery of Japan. Also Lafcadio Hearn after coming to Japan, famously wrote “…the little houses under their blue roofs, the little shop-fronts hung with blue, and the smiling little people in their blue costumes…”, the indigo color making a profound impression in his description of Japan. 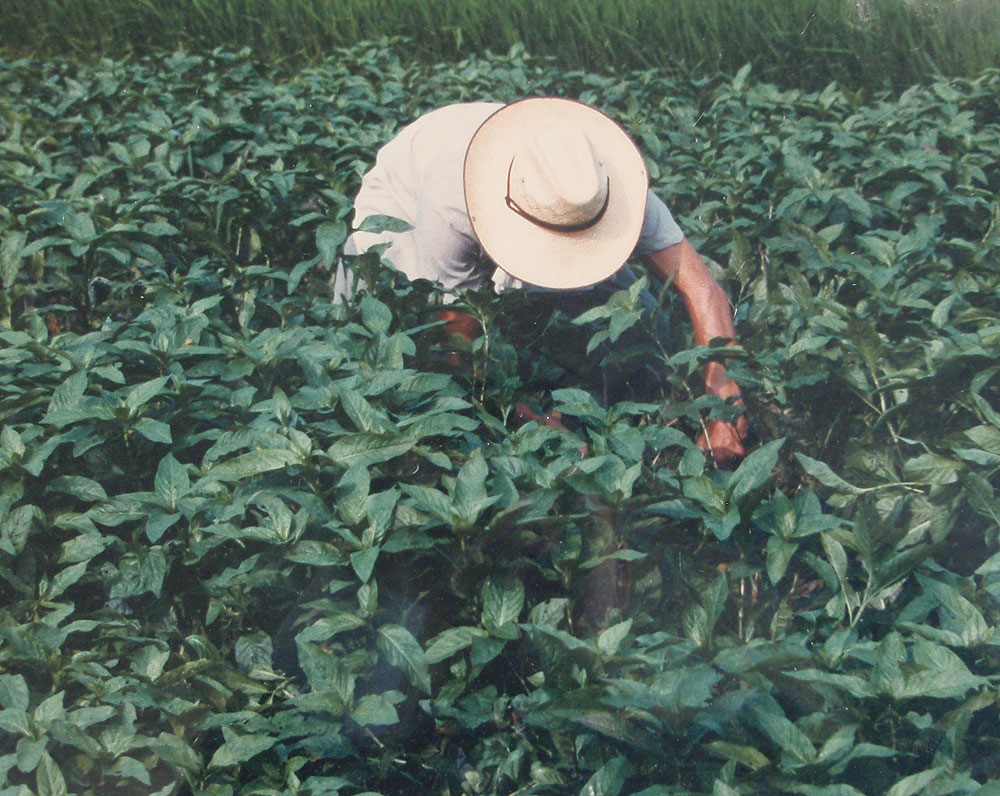 Indigo-dye is also called “Japan Blue”, the story behind this starts in the 8th year of Meiji (1875), when a chemist named Atkinson from England was invited by the Japanese government, and seeing the Indigo color and dye widely used in Japan at that time he was very impressed and called it “Japan Blue”. The deep Indigo color that also reminds you of the blue color of the sea, has always appealed to the aesthetic sense of the Japanese people and is deeply rooted in the daily life in Japan. So for what reason was this color used for Bogu?

The natural color pigment of Indigo-dye is hard to use and any fabric has to be dyed multiple times to produce the deep blue color that we are used to see. During the process, the fabric will go from being a slightly green color to a deep blue with hints of purple, a process that can take a long time and 40+ repetitions before reaching the final and desired color hue. What’s even more amazing is that the Japanese with their aesthetic sense, actually named all the levels the indigo-dye passes through during the dying process. 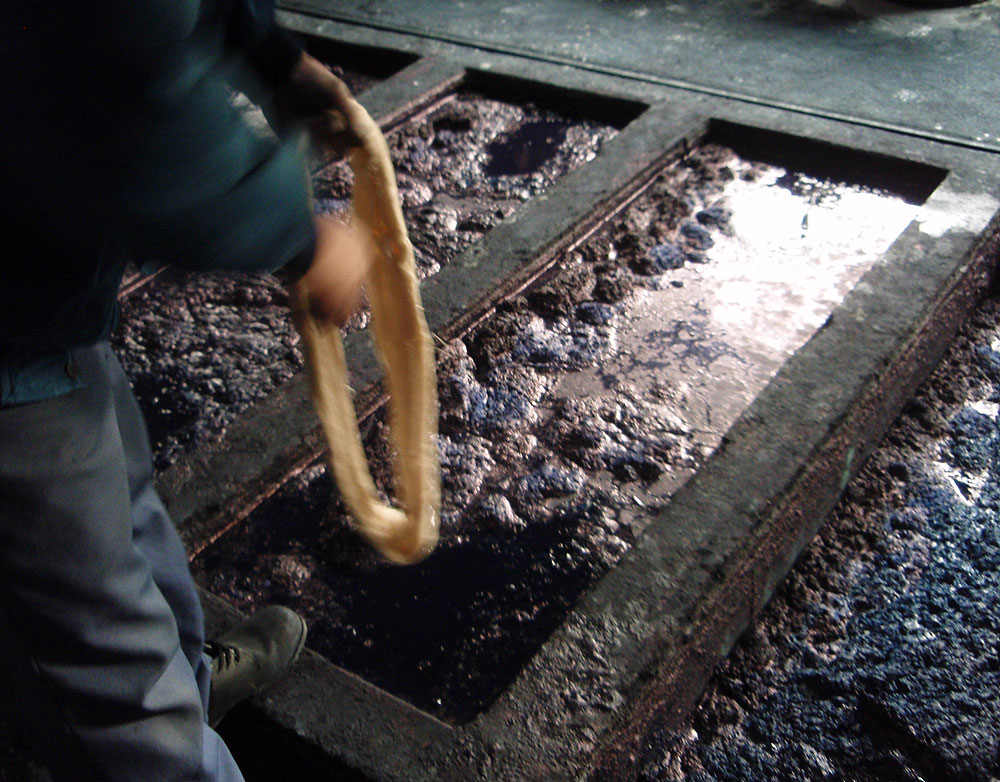 Some examples of this, starting from the white fabric that it starts with, is the first dip which produces a very faint blue color and is called 藍白(Aijiro), as the process continues, the next level is similar to the faintly green color on the stem of a leek, called 浅葱(Asagi). Continuing on, the next level is 縹色(Hanada-iro), 藍色(Ai-iro), and as the color starts becoming deeper and navy, it becomes 紺(Kon), navy with a faint tint of purple is named 紫紺(Shikon), and the most common color to see when speaking about indigo-dye is 濃紺(Noukon), more commonly known as dark navy when speaking in Kendo terms.

The color just in between indigo and purple is called “褐色”(Kachi-iro), nowadays when people see the kanji “褐色” they might think of another color with the same kanji characters, but is read as “Kasshoku”, which is a dark brown color similar to that of tanned leather. But when speaking of indigo-dye, it refers to the deep dark navy color that borders on black with a purple hue, this color is called “Kachi-iro” or “Katsu-iro”. If you look at historically preserved materials from the Edo era for example, it is the dark indigo that almost looks black with a blue tint in it and for those that do Kendo it is the dark indigo-dyed color that you normally see on your Kendo Bogu. 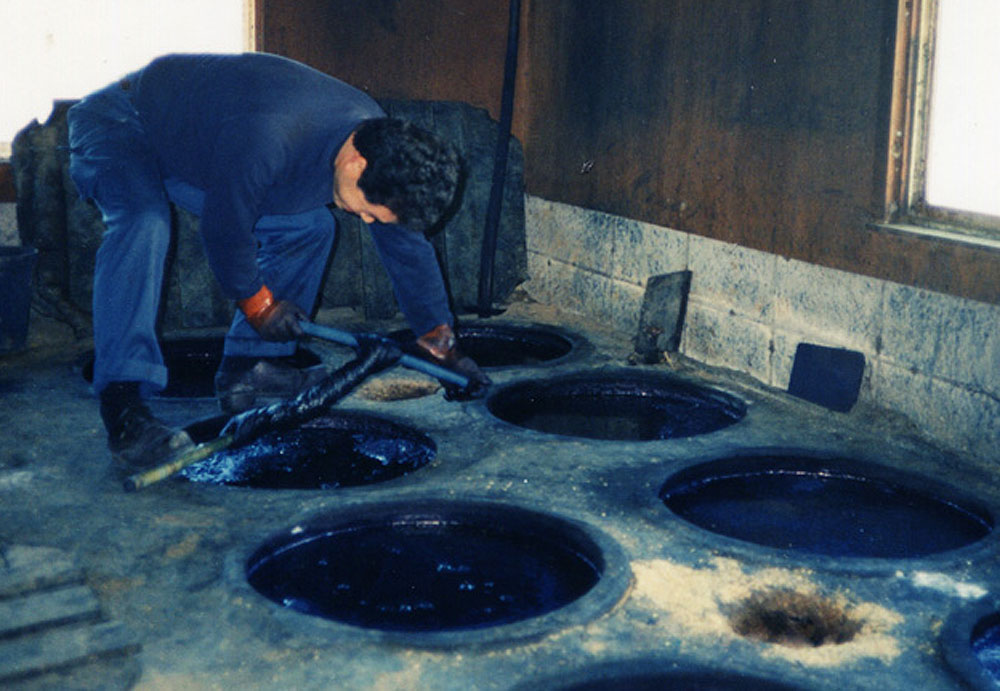 The reason why Kachi-iro was traditionally and historically used for Budo equipment in Japan, stems from a play on words, as “Kachi-iro” or “Katsu-iro” are homophones and also means “victory color”. Similarly to the dragonfly being called “kachi-mushi”, meaning “victory bug”, making it a popular theme among Budo practitioners and also the samurai, “Kachi-iro” was thought to have an auspicious meaning and thus became the standard color used for Bogu. So part of the reason why the Kendo Gi, Hakama and Bogu are indigo-dyed is because of the Kachi-iro color.

Another reason why many garments were dyed with Aizome, was because the organic indigo-dye made from the indigo plant, made the garments warmer to wear and also imbued the garments with anti-bacterial properties. So in case the wearer was cut, or hurt, the indigo-dye would prevent bacterial growth and thus provide a lifesaving function in a time where infections from battle wounds could prove fatal. Spiritually and practically, the indigo color was seen as the most natural and fitting color for making Kendo equipment because of these reasons.

The colors of the Bogu are based in tradition

Besides the indigo color used for Bogu, another color that we are used to seeing is the crimson red color that is used for the inside of the Mengane, the back of the Do, or maybe even the lacquer on the Do itself. Additionally we also often see it used for the decorative braids on the Mune or for the Shokko decorations on the Ago and Mune. Nowadays you see a lot of Bogu with various colors for the decorative braids or Shokko decorations, but for older Bogu, it’s very common to see a red crimson color used for these parts.

As the indigo-dye is traditionally made by processing the indigo plant, the red color is also traditionally produced using dye made from Safflowers. The method for producing red dye came from China, so it was called “呉の藍”(Kure no ai; the dye from the Wu state), this is because historically, ”藍” did not refer to the indigo color, but rather the dye itself. This eventually became ”呉藍”(Kureai), which then came to be called ”紅”(Kurenai; Crimson). Perhaps the reason why the indigo-dye and crimson colors match so well on Bogu is because the fact that they both are organic dyes. 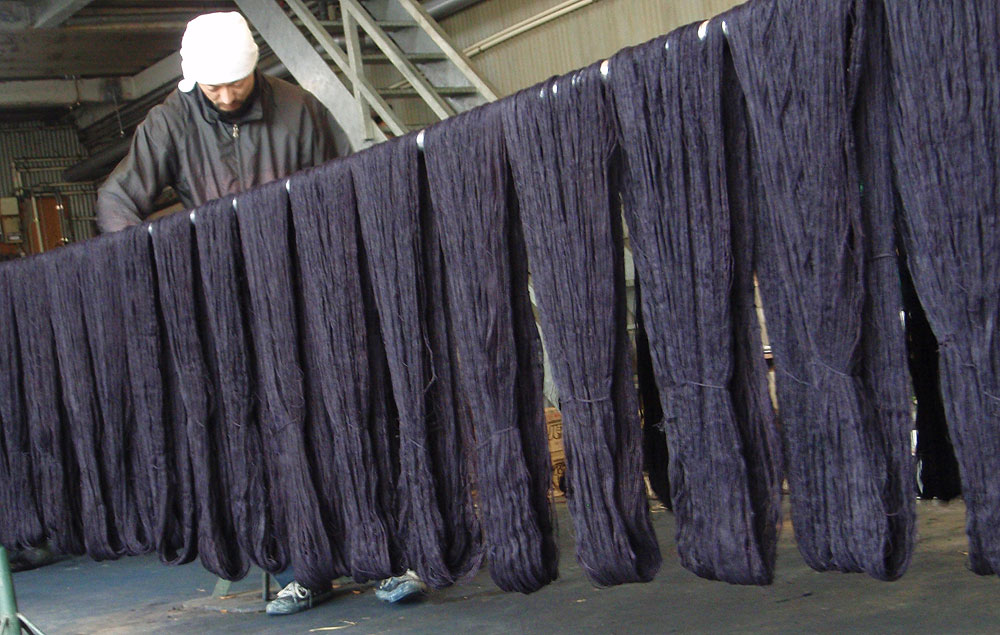 The crimson color is also a color that has been used historically in Japanese culture. However, it’s hard to say that the color was something that the common people had access to. Because the crimson color was hard to produce due to the limited amount of dye that could be made from the Safflowers, the crimson dye was highly valued and although the price would vary depending on the time, political and economic situation, cultural changes and so on, it can be said that it was worth its weight in gold. 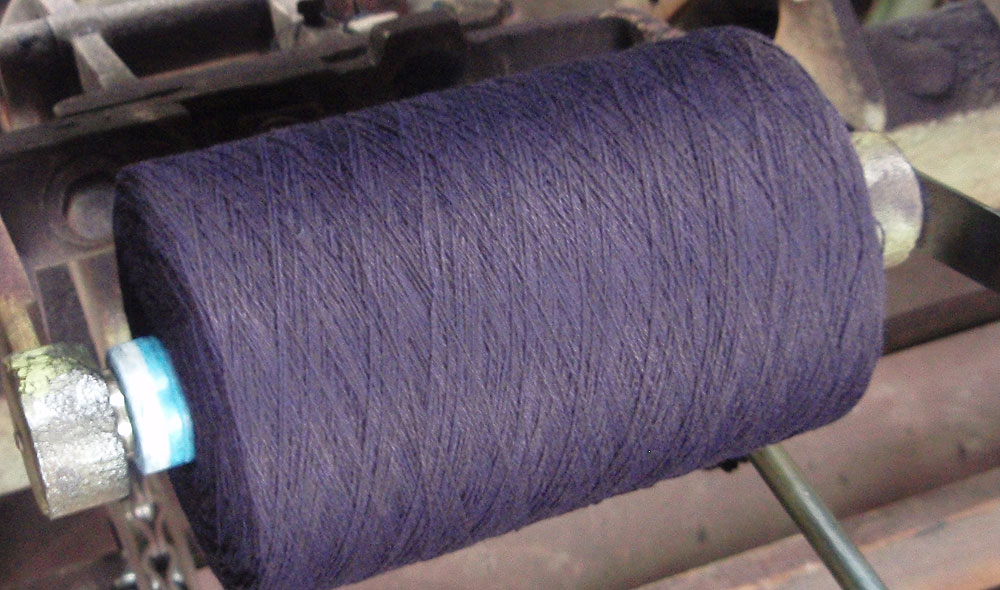 For a Samurai warrior to wear garments or use accessories dyed in crimson color, might very well have been a sign of wealth and political influence. Looking at the predecessor to the Bogu, the Yoroi armor of the Samurai warriors, you might notice that many historically preserved samples are brightly colored with colors such as crimson red, also many accessories and equipment from this period are colored similarly. 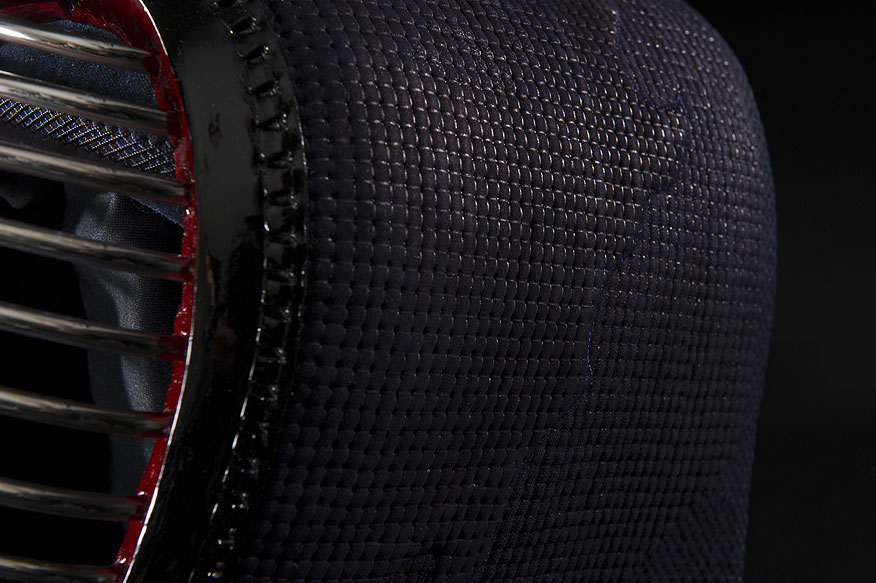 As much as it was important that your equipment protected you during battle, it also had the function of overwhelming your opponent mentally by displaying your material wealth as well as a means of expressing yourself on the battlefield. Also in Kendo you can use a variety of colors for the decorative braids on the Men, Mune and Kote and also for the Shokko decoration to express yourself, which might very well turn out beautifully, but please also remember that it’s not simply for decoration, but that there is certain cultural reasons behind having certain colors on the Bogu also.

On the other hand, if you try to express yourself too much through the color of your Bogu, and allow yourself to be affected by trend without taking tradition into consideration, your Bogu might end up as something very unbalanced and odd. During the Meji period as trade with foreign countries became more common, a variety of trendy colors became available and Japan instantly came a very colorful country compared to before.

However, even to this day Kendo equipment keep their traditional colors, and even so, it is naturally accepted. Perhaps this is because these colors comes very naturally and are deeply rooted in the Japanese cultural heritage and because these colors appeal to the sense of “Wabi-sabi” in the hearts of the Japanese people. As a craftsman, and as users, we hope that you can learn more about Japan, and it might be interesting by starting with learning about the meaning of “colors” in Japanese culture.