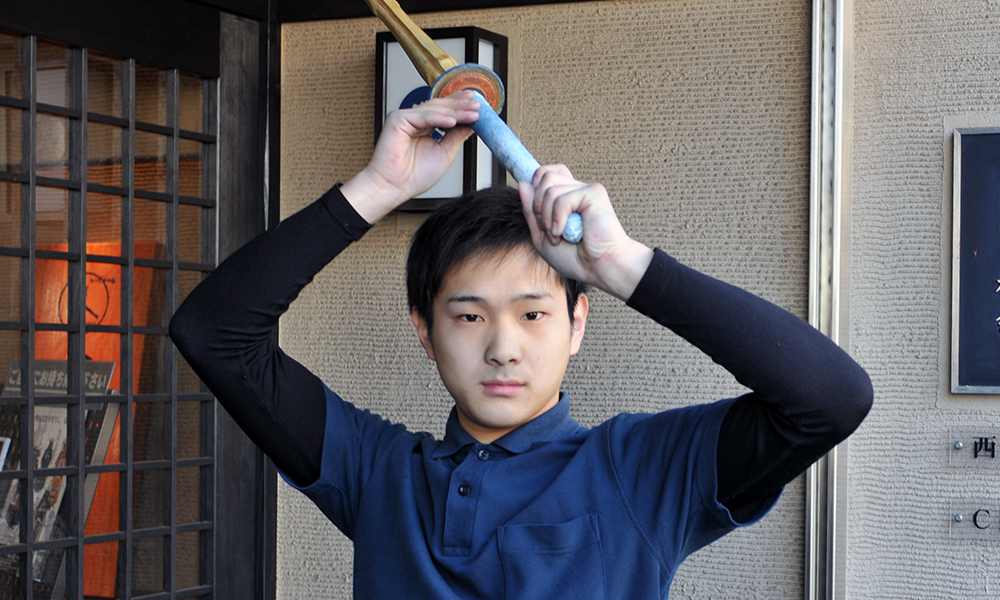 Jodan is known as the “stance of fire” or the “stance of heaven” and it is the first of the kamae (stance) you learn in the Nihon Kendo Kata. It is an aggressive posture and requires not only a lot of arm strength, but also courage and dignity.

We asked Toshinari Kondo, a jodan kenshi 3-dan, who works here at Tozando, how he came to study jodan and what it is like to train exclusively in that kamae.

-When did you begin kendo?

It was in junior high 1st grade, so I was 12. I entered the kendo club at Takase Junior High and trained under Saito Sensei. But the level of kendo was not very high, and there was not much intensity to the training.

-Did you play with jodan from the beginning?

No, I started at chudan, just like everyone else. I changed to jodan after I entered Kotohira High School which is known as a strong school for kendo.

-What led to that change?

There was a kendo player in the same grade as me who played jodan. In the Newcomers Games he lost easily to a player from a not so well-known school. He wasn’t very studious in training either, so the team manager got mad and made him quit playing jodan.

On the other hand, I was playing with chudan, but I played against a regular team member from Eimei High School, a famous kendo school, and beat him. I lost narrowly in the 2nd round, but when I went and reported that to the manager, he said “you came from a not so strong junior high school and don’t have much experience, but you won against a regular member from a strong school because you have worked harder than those around you. We want a strong jodan player who practices hard like you, so why don’t you try jodan?” That is how I began practicing in jodan.

-I see. What was it like transitioning from chudan to jodan?

First, the positioning of your feet switches, so that felt awkward. With chudan, I only trained my left foot to launch me forwards, so I focused on training my right foot. Even then, until I got used to the fumikomi (stamping) there was always an awkwardness. Then there is the training for the left arm. In jodan, quite often you strike with the left katate (one-handed), so I focused on training my wrist.

-What kind of training did you do specifically?

Usually I would get home around 10 pm after kendo practice, and after that I would swing a shinai with weights on it with my left arm for about half an hour. My mother saw me doing that, then got a tyre from somewhere and made a homemade striking practice target. I was very happy about that, and it made me want to improve quickly.

-She’s wonderful mother! Did it take a long time to acquire the jodan position?

For me it took about a year to really make it my own. Even if you gain more strength and hold the shinai in a jodan position, I couldn’t break out of the chudan mentality when attacking, reading the maai (distance), or seizing opportunities. After about 1 year, I think I acquired something I could call my own style.

-OK. Are you pleased you transitioned to jodan?

Yes, of course. The advantage with jodan is that you strike with one arm, so you can use the full length of your arm to strike from a longer range. Also, you don’t need to raise the sword high before striking, which makes the distance from the sword’s edge to the striking point short, so it is suited for quick attacks. More importantly, jodan makes your whole posture look big, so you can intimidate chudan opponents mentally. When you face another jodan practitioner, you need to be careful and keep more distance than usual.

-What is your favorite striking move?

Firstly, katate men of course. However I remember a really satisfying strike, in the individual competition in high school grade 2, I got my first ever katate kote. After locking swords, when we parted he came for my men, but his kote caught my eye and I reacted almost automatically to strike it. That was really satisfying. It was a strike from a state of mindlessness, really. It was a very memorable one for me.

-Thank you very much for today. We hope you continue to succeed with your jodan kamae.

Thank you very much.