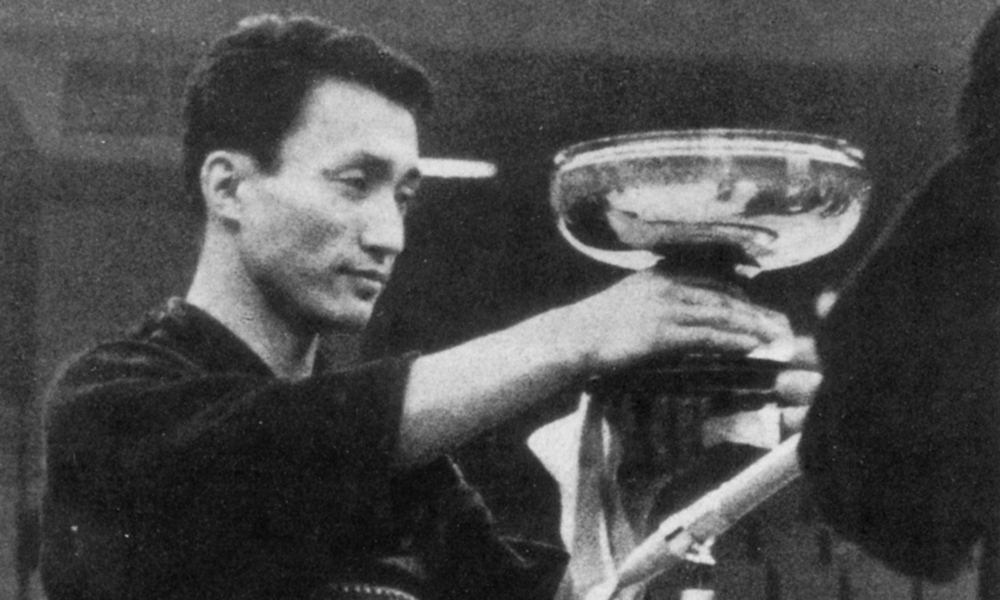 Corporate Kenshi who pioneered the “jodan-boom”. In his later years he became the pioneer leading kenshi with the double sword.

In only his second year as a company kenshi, as the Post-War competitive Kendo scene was established, he fought his way straight to the top!

It was Toda Tadao who won the All Japan Championship in 1962 and 1964. He was part of the Shiga branch of the Japanese company Toray, a member of their kendo team who fought in jodan.

His first participation in the All Japan Championships was in 1961, after he had graduated from Keio-Gijuku University in Spring. He reached the final 8, but lost to Hiroshi Konuma of the Tokyo Metropolitan Police.

In that tournament, Edo Takayoshi, who was the national university champion, reached the final 4 in his first participation. In the previous year, 21 year-old Kuwahara Tetsuaki won the tournament. The generation that had begun kendo after its revival postwar was gaining momentum, and the one could see the faces of kendo’s center stage beginning to change.

He started developing his jodan kamae after he enrolled in Keio-Gijuku University. He learned under Nakano Yasoji Sensei, who had trained under the legendary Takano Sasaburo of the Tokyo Koto Shihan University before the war. Under Nakano’s guidance, Toda came into his own with the jodan kamae.

In 1962, when the 10th All Japan Championships were held, Toda was 23. He defeated pre-war veteran Ichikawa Hikotaro (Shizuoka), Nakamura Takeshi (Tokyo) who was younger than him, and Nakazato Makoto (Ibaraki) who was almost the same age as him.

In the semi-final he claimed a nihon win against Sato Hironobu, 31, who was a respected member of the Tokyo Metropolitan Police. The final was against 44 year-old Katayama Mineo (Kumamoto), a graduate from the pre-war Dai Nippon Butokukai’s Budo Senmon Gakko – the elite pre-war Kendo school headquartered in Kyoto, also known as “Busen”. The significance of this should not be understated, Busen was led by one of the father’s of Kendo, Naito Takaharu Sensei and was renowned for producing the best of the best. Toda would need to prove himself against one of Japan’s best kendoka.

Katayama started in the chudan kamae, but transitioned to jodan to match Toda. Yet, as he changed kamae, Toda stole a brilliant kote. Not skipping a beat, Toda followed up his audacious opening with a strong men and was crowned champion for the first time.

2 years later, in 1964, he won the championships again in a final against Nishiyama Yasuhiro of the Tokyo Metropolitan Police (28), claiming his second title.

The championship in-between of 1963, Toda also made it to the final, but was defeated by Yano Taro (Hyogo). Had he succeeded, that would have set a record of 3 consecutive championships. His 2 championship victories were only the second time in history at that point, after Nakamura Taro’s victories in 1955 and 1959. With Toda laying the foundation, other young jodanka such as Chiba Hitoshi (Tokyo Metropolitan Police) and Kawazoe Tetsuo (Kokushikan University) would go on to win the championship, in 1966 and 1971 respectively.

Both would win the championship multiple times (Chiba three times, Kawazoe twice), which saw the kendo world go through a so-called “jodan boom”. This continued until 1979 when changes to the rules saw the introduction “munetsuki” (chest-strike) become a legal technique as a means to combat jodan.

In the Heisei Era (from 1989), when university kendo started revisiting “nito” (two sword kendo), Toda, who was affectionately known as “Jodan Toda” began studying nito himself, eventually passing his 8-dan exam in the kamae. He was known as the leading kenshi in nito until he passed away in 2016.