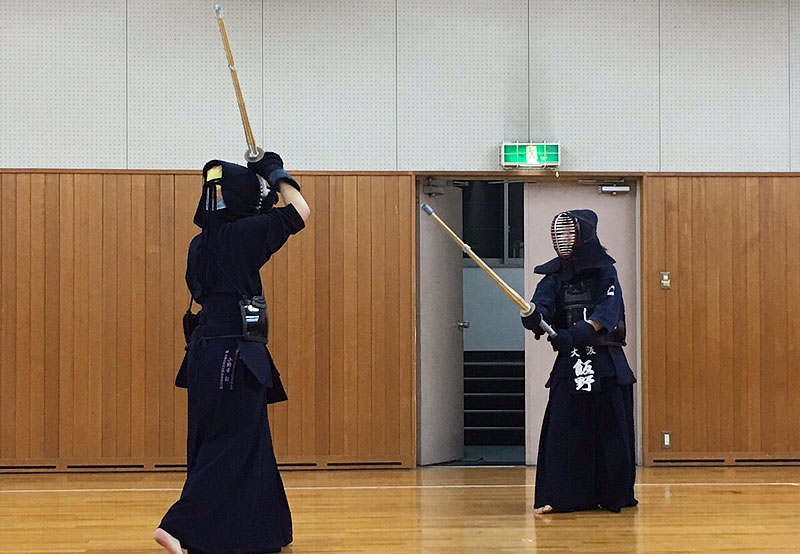 In kendo, your kamae is more than just how you stand and hold your sword. Each kamae has its own personality and peculiarities. In this article we are taking a look at the distinctive and dramatic jodan-no-kamae. With its unmistakeable silhouette and powerful reach this stance is very attractive to many kendoka, but requires intense dedication and a deep undersanding of kendo to make it effective.

Jodan is immediately recogniseable by the sword held aloft above the head. The word jodan itself means upper level, in this case referring to the level which the sword is held. In jodan you raise your sword above your head keeping about a fist’s space between the butt of the tsuka and your forehead. Variations exists about where you place your fists, how you hold your elbows and orient the shinai. Generally the sword is at a 45 degree angle.

Commonly, you will encounter two main types of jodan: migi jodan and hidari jodan. Migi and hidari are simply left and right and refer to which foot you put forward. The latter is by far the most common and is what most people imagine when you say jodan. Hidari jodan has the most potential reach and allows for strong katate-waza (single handed techniques). Katate-waza are jodan’s strength and speciality – primarily katate-men where you use your reach advantage and high position to propel your shinai at speed and strike men one-handed.

Migi-jodan is far less common and you almost never see it as a dedicated kamae. Instead you will see kendoka adopt it during matches or between waza briefly, either pressing an advantage or keeping themselves ready to strike before returning to chudan-no-kamae. Further variations exist where you can hold the shinai single-handedly in either your left or right hand (switching your leading foot to match) – this is referred to as migi/hidari katate-jodan. This is extremely rare, but you do see it on occasion from partiuclarly experienced kendoka or kendoka with special requirements.

You can’t talk about the characteristics of jodan without addressing how adopting this kamae significantly alters the datotsu-bui available to you and your opponent. For one, with your sword held above your head striking men will be very difficult for your opponent, almost as a compensation both your migi and hidari kote become valid targets as they are raised above your shoulders. Beyond this, because your sword is elevated access to your tsuki is considerably easier and, in theory, so is your do. You no-longer have your kensen and strong chudan-no-kamae to protect you, only your maai (distance) and seme (pressure).

As someone facing jodan from chudan-no-kamae your datotsu-bui do not alter, however the manner in which you are attacked and pressured is radically different. Your jodan opponent can threaten your men from a futher distance and at great speed. Over-compensating against this threat will then open up different opportunities for your opponent; you will find yourself being struck from unexpected angles at unexpected times. Many people adopt a modified chudan-no-kamae where the kensen is raised slightly to align with their opponent’s eye-level rather than aimed directly at the throat to combat jodan. These are very broad strokes – the intricacte relationship between jodan and variations of chudan itself is another article in itself!

Suffice to say, adopting jodan changes enough characteristics of your kendo that you need to have an understanding of not only your new kamae, but how other kamae relate to it to be able to use it effectively. This goes for chudan-no-kamae as well; if you want to face a jodan-ka then you need to understand how their kamae is different from yours and what that means in terms of doing kendo.

Jodan as a kame has been around long before kendo was even formed. It is present in almost all forms of kenjutsu (traditional Japanese sword arts) several of which went on to inform the founding of kendo and the principles upon which it is based. Jodan is also not unique to the sword, you can see the stance adopted using all sorts of weapons like the naginata (glaive) and bo (staff). Jodan is connected to the fundamentals of Japanese bujutsu; both through history and application.

Most kendoka will first encounter jodan when learning the Nihon Kendo no Kata. This set of ten forms provides a theoretical and spiritual basis for kendo and was derived from a variety of kenjutsu styles. The continued practice of these forms in kendo preserves the link kendo has to its roots in kenjutsu. The kata was made and revised by a council of influential koryu and kendo practioners, you can see the hallmarks of their styles in each form. If you want to look into jodan and where it comes from the kata is a great place to begin.

Kendo kata is more than just the mechanics of kenjutsu; it involves entering into a certain mindset. Experiencing jodan in the context of two people facing each other with katana is very different to practicing it in bogu and holding a shinai. Great jodan requires the versimillitude and intent that is present in Nihon Kendo no Kata. Therefore kata practice is a great tool for learning about jodan.

To think that jodan is simply a change in the way you hold your sword and attack would be a mistake. Jodan demands a righteous mindset and force of will to execute properly. A lot of this attitude is built upon confidence, something that is very difficult to acquire without experience. It isn’t recommended to lightly take up jodan – before embarking upon it you need to understand the commitment involved. Learning to reverse your footwork, re-learn fumikomi and developing the strength to perform effective katate waza is only the beginning!

The foundation of good jodan kendo is good chudan kendo. A deep understanding and strong seme from chudan allows you to adopt judan with confidence and develop that unstoppable attitude that jodan is known for. It is important to not mistake arrogance for assertiveness in this case – always excuse yourself before entering jodan, it is rude to assume it arrogantly against anyone. The only way to acquire this attitude and presence is to put the work in.

It is easy to see why jodan is a fascinating kamae in kendo; with its explosive waza and distinctive look it is immediately recognisable. It also has a long-stnading culture of exceptionalism surrounding it – the kamae itself is sometimes called the stance of “heaven” or “fire”, these names are derived from classical schools of thoguht surrounding kenjutsu (if you would like to know more, explore the kata!). Heaven and fire are themselves highly valued appelations and this adds to jodan’s mystique.

It is best to avoid viewing it interms of its inherent advantages and instead considering it as another approach to kendo. Every kendoka should pursue learning jodan at some point in their journey, but at what point is appropriate is probably a lot later on than most imagine.