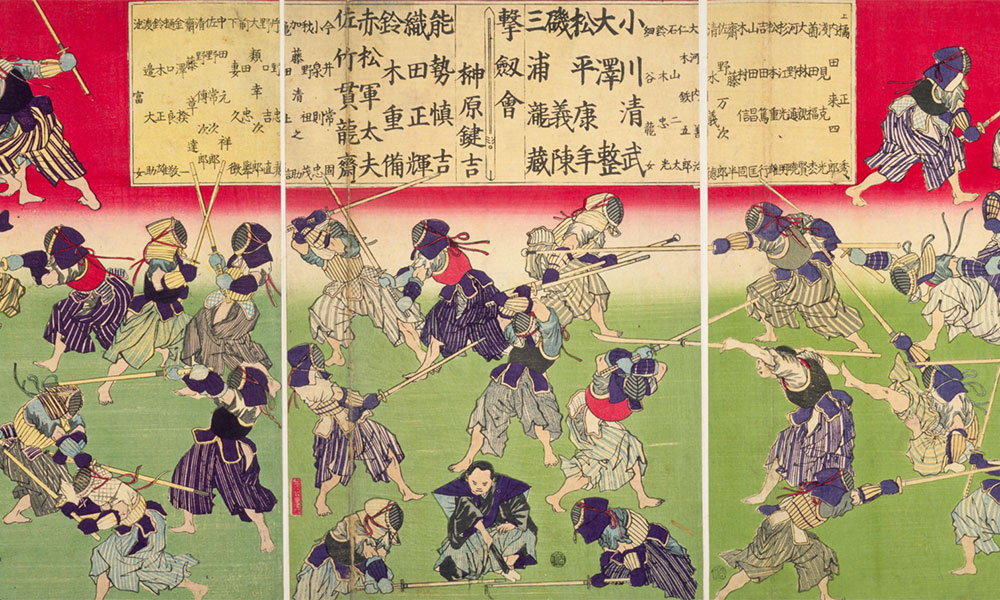 When it comes to kendo and its development, it is difficult to point towards a definitive “father” of kendo. Naito Takaharu and Takano Sasaburo are often given such praise. It goes without saying that modern kendo would likely be a very different activity if not for their influence (if it would still exist at all). However, despite their contributions – which could not be overstated – they too learned “kendo” from someone.

Naito Takaharu at one time studied Jikishinkage-ryu under a teacher who is credited with creating the gekiken-kogyo phenomenon and ushering in the age of gekiken as sport – Sakakibara Kenkichi (1830 – 1894). Sakakibara could be credited with bringing kenjutsu through a very dark period for those who taught it for a living.

In a time when kenjutsu had fallen from grace in the eyes of the government, when the haito-rei (ban on the wearing of swords) was in effect, and when public interest was waning, Sakakibara created a venue for the public to witness gekiken and by doing so helped to maintain interest and at the same time laid the groundwork for what would eventually develop into the modern phenomenon of kendo that we know today.

Sakakibara was born into a samurai family of the Sakakibara clan near modern Tokyo. He learned kenjutsu from Otani Nobutomo, who taught Kashima Shinden Jikishinkage-ryu. Sakakibara became very proficient in this style and was transmitted the menkyo kaiden in 1856. He served the Tokugawa Shogunate as an academy instructor and then, having been noticed by Tokugawa Iemochi, he became his personal bodyguard and instructor. However, after achieving other high titles, following the death of Iemochi he resigned and opened a dojo in what is now modern Ueno in Tokyo.

When war broke out between the Pro-Shogunate and the Imperial armies, Sakakibara did not take direct part. However, during the battle of Ueno (July 4, 1868) he is credited with carrying an imperial prince on his shoulders and away from the fighting around Kan’ei-ji temple which he had said was his duty to protect. This certainly does not mean that he was not capable in actual combat, as in an earlier trip to Kyoto with the Shogun he is said to have cut down three retainers from the Tosa Clan.

His knowledge and ability would even have him later helping to create the Keishi-ryu Kenjutsu that was developed following the Meiji restoration to be used by the police forces. He was also known for cutting Kabuto helmets in shows of extreme skill. One of these such occasions was witnessed by the Emperor Meiji himself.

Due to the ban on wearing swords and dueling that had taken place in 1868, many teachers of these kenjutsu schools began having financial difficulty, and Sakakibara was not exempt from this. As he found himself in the grips of such hardship, he had to find some way to make kenjutsu a viable source of income again. To this end, the idea of introducing the public to displays of gekiken matches known as 撃剣興行 or “gekiken-kogyo,” came to his mind. These performances could be argued to be the forerunner to modern kendo.

Due to the popularity of these shows, many similar demonstrations would take place (not all to the same level of ability). The “sportification” of these matches was never lost on Sakakibara, himself. Many similar “troops” arose in different areas, all with varying levels of ability.

Though for the time being, it could also be argued that as a result of these shows public interest did indeed rise and this allowed for continuation through the Meiji Era. As someone who had learned under him, Naito Takaharu, would go on to have such a massive influence on modern kendo – even teaching at the Budo Senmon Gakko or “Busen” in Kyoto, it would be impossible to say that he did not even indirectly have an enormous influence. Gekiken would eventually be gone, as was true with many things in these tumultuous years. It simply didn’t stand the test of time in the form it had been imagined as.

Sakakibara ended up trying his hand at a storytelling endeavor and then an Izakaya drinking establishment. As both undertakings never really bore fruit, he found himself back in the dojo teaching Jikishinkage-ryu. He is also credited with the created of the Yamato-tsue. Essentially a walking staff with a hook, this could be worn along with a large wooden fan in one’s obi to take the place of the katana and wakizashi which could no longer openly be worn. Sakakibara passed away due to heart failure at the age of 63.

He is said to have regretted what gekiken eventually became. He had intended for an enshrinement of a spiritual, artistic, and martial display. Hopefully, however, modern kendo does this concept justice. In 2003 he was inducted into the 剣道殿堂 or the “Kendo Hall of Fame.”