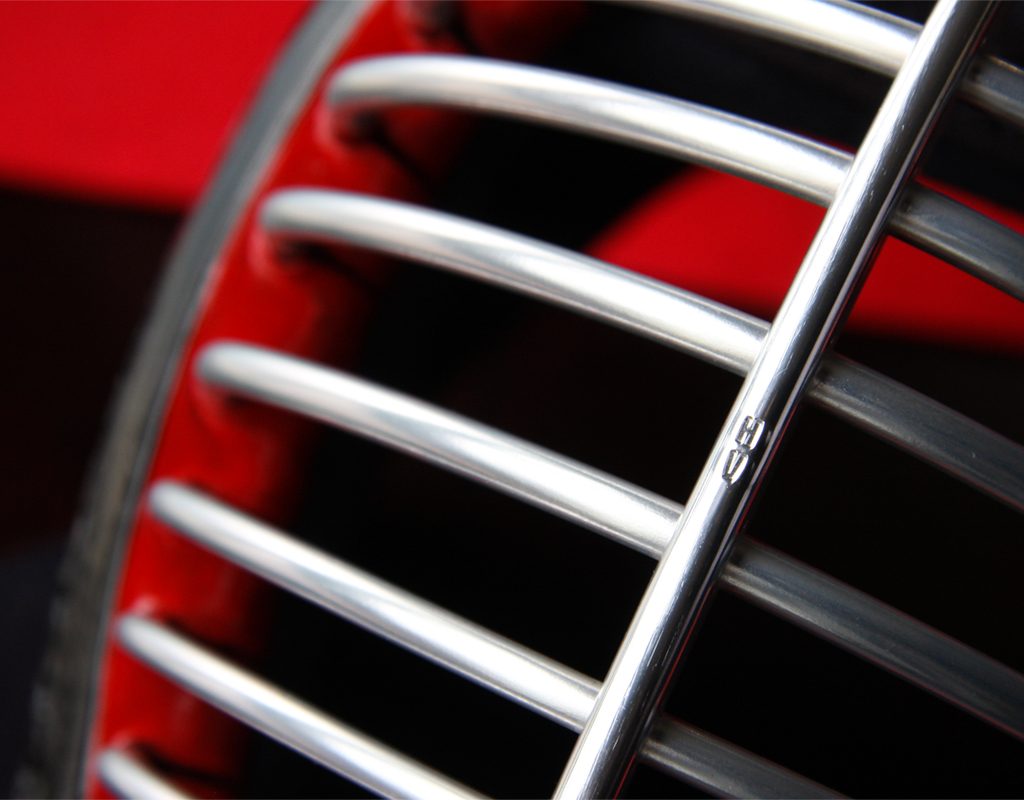 In this week’s spotlight, we are taking a look at (and through) a brand new mengane. In particular, our brand-new High Vision Mengane which we recently developed. For those that don’t know, the mengane is the metal grill that protects the front of your face in a kendo men. Not only does it provide essential protection, it also gives the men its defining look (along with those sloped flaps – the mendare).

Whilst protection is paramount, when wearing the men the main thing you think about when it comes to the mengane is how you are looking through it. Often it takes some adjustment to get your men to sit right and then you find the grill blurs and fades into the periphery as you focus through it and at your opponent.

Though all kendoka get used to it, the mengane actually interferes a lot with your vision. Which isn’t surprising, considering it is a giant red grill right in front of your eyes. This intereference can be quite limitiing to your kendo, especially in tense keiko (training) or shiai (matches) where every cut is decided by the tiniest of factors. It was this problem that was the catalyst that began the development of the High Vision Mengane – the objective was to expand the field of vision of the user, but in a manner that was orientated towards kendo keiko.

Mengane are constructed by taking semi-circular bars of various sizes and arranging them on an elliptical ring of metal then reinforcing the construction with a spine down the middle. The spacing of the bars tend to be uniform; except for a section called the monomi, which is a wider division at the eye-level of the user. This monomi provides the kendoka with an adequate amount of space to see their opponent and there movements.

All mengane are built to standard sizes, from 12 to 14 bars. It is next to impossible to get a custom made mengane. Instead they are made in various different types and order-made men are built around them so the user’s eye level matches the monomi. Of course, because many bogu sets these days are made in bulk, a perfeclty aligned monomi is not always possible, but for the most part there is a size that will fit. However, because the margin for variation is quite large, kendoka often find their monomi moving during keiko as the fit of their men loosens or is knocked around from repeated strikes.

The HV Mengane solves this issue by curving the bars both above and below the monomi along the vertical axis. This provides an increased range of vision above and below the monomi in a natural way, greatly reducing the interference of the mengane. However the real asset of the HV Mengane’s design, is not how it makes up for the shortcomings of conventional mengane. Instead, it’s greatest advantage is the ease in which you can read your opponent’s body language and movements.

Once you move beyond the foundational principles of striking and timing opportunities in Kendo, you begin to work on applying seme – that is, pressure on your opponent through subtle movements and position of both your body and the tip of your shinai. This is a symbiotic process, where you are applying your own movements and pressure whilst reading your opponent’s: likewise they are doing the same, trying to read and pressure you.

Because the movements are so subtle and the situation can change almost immediately, it is important not to over-focus on a particular point; otherwise you miss something key and your opponent gains the advantage. In keiko, kendoka are encouraged to practice “enzan no metsuke” (遠山の目付け) – gazing at the distant mountain. This essentially means taking in the whole picture, not focussing on little details. This principle is exactly what The HV Mengane taps into.

We are really exicted about the introduction of the HV Mengane, it was developed specifically in line with the needs and preferences of practicing kendoka. We believe in making equipment for practitioners, which is why the HV Mengane project was devised by our resident kendoka Hayashi Sensei (Kyoshi, 7 dan) alongside feedback from practitioners as well as our in-house craftsmen. It is really satisfying when an idea based on budo principles can be brought about and transformed into a practical piece of equipment.

Thanks for reading and look out for more equipment spotlights in the future!