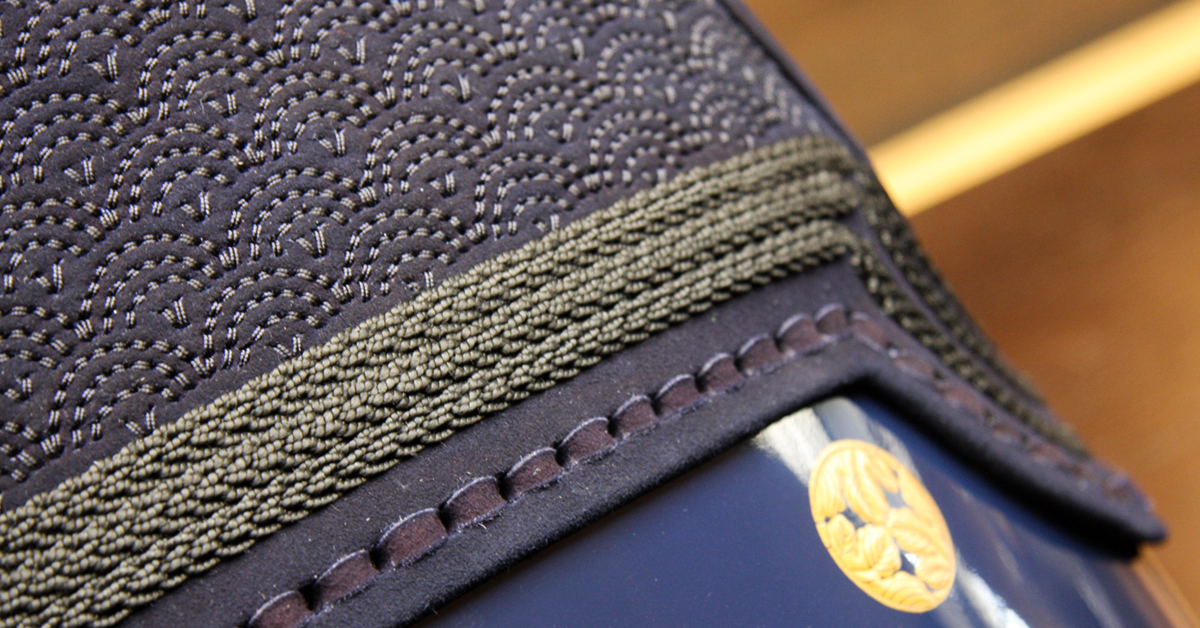 Amongst kendo equipment, one of the most distinctive parts is the do (胴). This protects your chest and stomach and is made from two main components: the curved plate that covers the stomach called the dodai (胴台), and the piece that covers the chest called the mune (胸).

In this article we are going to take a basic look at the mune and explore how it is constructed, different materials it can be made from and how it is decorated. Then we discuss some useful pricniples to keep in mind when designing your own.

It is interesting to note that kendo equipment terminology tends to oscillate from the painfully literal to the amusingly metaphorical. The terminiology associated with do tends to be fairly straightforward – for example do means “torso” and mune means “chest”, dodai means “torso plate” and so on. So far so good. However, as soon as you start straying into the decorative parts the terms get a little more metaphorical, which we will touch on later.

The mune is most often made out of two pieces of leather, one for the front and one the reverse-side, these are known as the omote (表) and ura (裏) respectively. In between these two surfaces the artisan then uses further materials to provide a solid core. This varies from workshop to workshop, but one example is several layers of fabric either side of a thin core of stiffer material like card or more fabric.

Then when the surface is stitched the layers are brough together and become stiff as the many threads dar the pieces together to make a stiff plate that also has some give.

The most common material used for mune these days is kurozan leather. This style of leather originating in Hyogo Prefecture. It is thought to have been popular amongst Sengoku–jidai (Warring States Period) samurai and generals as a material for armour. This sort of leather is black and has a fine textured surface that resembles small irregular diamonds. Hand-made and traditional examples are hard to come by, so much of this material is now made overseas and you can find a variety of qualities. Kurozan leather is not the only available material; regular cow-leather is also used, as is deerskin and orizashi cotton (the fabric used for kendo dogi).

Deerskin mune use deer leather that has been dyed using the traditional indigo pigment used in making the fabric of kendo armour and uniforms. This dye is called aizome (literally “indigo dye” it is written like this “藍染”) and is thought to posess some mild anti-bacterial qualities as well as staining you blue! Though indigo deerskin is not as durable as kurozan leather, but it fades in the same unique manner as aizome uniforms and the bogu futon (main padding).

Once the base construction of the mune is decided, it is then decorated. These decorations bind the mune together and are not just for aesthetics. The stitching provides extra durability to the surface for example.

Though often seen as quite traditional and utilitarian, kendo bogu has lots of places where decorations can be applied. As a general rule, decorative flourishes that stand out too much or are gaudy are discouraged, but there are always exceptions. The do and mune are no different, in fact the mune will always feature some sort of decoration, even if it is incredibly simple.

The decorations on the mune can be split into two broad categories – the decorative braids called kazari-ito (飾糸) and the main pattern or motif known as the shokko (曙光). Shokko has several meanings, but literally means daybreak or first light or first glimpse. Either way it implies a flash or gleam, something catching the attention. this is one of those more metaphorical terms that we mentioned earlier.

The kazari-ito are the thicker braids that define the look of the mune. They usually trace an outline or pattern leaving a large open space to be filled by a shokko. Often they are based upon natural themes, this is a trend that is common throughout budo equipment, for example trees, clouds and even animals. Some are quite traditional, whilst others are more contemporary.

If you look at the picture above you can see the kazari-ito tracing a pattern around the edges of the mune. This particular design is called sangaimatsu (三階松), which means a three-level pine tree. The top parts are reminiscent of the distinctive sillhouette of the Japanese pine tree, hence its quite literal name. This is a fairly traditional design that remains very popular.

You will notice there are braids in lines at the bottom of the mune, these kazari-ito are known as ashi (足), literally “feet”. They form the basis of the design and stretch out along either side. It is common to have two or three of these “feet”.

The kazari-ito can be done in a variety of colours, but generally when you are buying a do as part of a whole bogu then they match the kazari-ito present on the rest of the bogu. The chosen colours also tend to be fairly conservative choices like blacks, browns and deep navy; though bright reds, purples and whites are not unheard of.

Most kazari-ito can be separated into two broad types. Those that enclose the whole area of the mune like the sangaimatsu example above and those decorate the only the bottom section leaving a large space for shokko above them. A good example of this latter type is the onigumo style. Enclosed types are traditionally favoured because the braids at the top help to catch any errant shinai tips from slipping up towards your throat. This was perhaps somewhat more relevant when the munetzuki technique was still used. In actual practice this is a minor consideration.

Conversely the kazari-ito styles that decorate the lower part of the mune are prized for their simplicity and dignified look for those that do not want a flamboyant shokko.

The shokko is the motif or pattern that fills the negative space enclosed or separated by the kazari-ito. It’s secondary function is that it provides a lot of stiffness to the core materials of the mune and creates a more durable surface. The mune has to protect you from unintended collisions or off-mark tsuki-waza, therefore its durability as a peice of armour is important. The shokko is an elegant solution that not only provides some aesthetic interest, but also serves a practical purpose.

There are many types of shokko and they can be customised with a variety of colours. They are made from much thinner threads than the kazari-ito and their stitches help bind the mune together. They can vary from being incredibly understated to incredibly eye-catching depending on the choice of pattern and thread colour.

The shokko is not unique to the mune it is also present on the ago (顎) or throat protector on the men. When bogu are designed as sets the ago-shokko and mune-shokko match each other. This provides a unifying theme for the bogu as it were. Both are places that also receive the tip of the shinai.

The shokko are as varied as kazari-ito and are also thematically grounded in Japanese naturalistic and cultural themes. There are so many that we will not list them all ehre, but give examples of some of the most prominent and their connotations.

Literally named after the dots on a go (碁) board this is considered the standard default shokko. Usually done in a colour to match the kazari-ito or sometimes crimson, it provides a durable and dignified surface to the mune. It also has a diagonal variation known as nanamezashi – 斜刺.

Named after a bird (in particular a plover) flying through raging waves, the namichidori motif is enduringly popular in Japan both in and out of bogu. It is said that the waves resemble your worldly concerns and that the bird is your will to overcome them.

Named after the guardian deity of Buddhism himself, this pattern has strong associations with the warrior caste and heroism. This patterns of interlocking geometric shapes (or lines in the case of the shokko) are often found on statues of Bishamon-ten (毘沙門天) in temples.

Meaning tortoise-shell, kikko designs are associated with longevity and good fortune. Popular not just on bogu, but also kimono and other traditional crafts in Japan.

Asanoha – hemp leaves – is a very traditional pattern across Japan. It has an enduring status in Japanese culture thanks to the introduction of hemp in the 16th century to Japan and its proliferation as a main material for making clothes, alongside silk. Due to how fast and vigorously the plant grows it has strong connotations with growth, good health and perserverance.

As you can see there are many shokko designs with their own meanings and they can be customised with multiple colours. People tend to choose shokko from the way they look, but some people also prefer certain styles because of their meaning. There is no fixed rule either for the colour, but there are traditional combinations of course.

Now that we have an idea of what makes up a mune and the different parts involved, we will discuss how to go about planning and designing your own mune when ordering a custom piece.

The first principle to keep in mind is what sort of bogu will the whole do be used with? You should think mainly in terms of kazari-ito at this point. Though the shokko can be a unique feature of your individual parts of your bogu, the colour of the kazari-ito should match across your bogu. In reality many people swap parts around and it doesn’t always match, but aesthetically it looks best if the kazari-ito match or at least are a similar shade or tone.

The next principle also concerns matching patterns. This time the shokko. Many men come with a plain cross decoration for the ago instead of a full shokko. These pair well with any shokko and give you a freedom of choice. However if you men already has a distinctive shokko then it is probably wise to match that with your mune-shokko. Some practitioners even adopt a signature shokko that they always get with their various men and do.

You should also consider what sort of dodai you will be having alongside the mune. Complimentary colours between the kazai-ito, shokko and dodai are important to consider and you do not want to clash too much. Do tend to look best with one focal point, either the dodai or the mune, going overboard on both can end up looking overly ornate or gaudy.

Balance between the components of your bogu is the most important principle to stick to. Consider how everything will look together and remember that it is easy to change the whole look of a mune simply by changing the colour of the shokko. If you have a very distinctive dodai for examplel you can still have an ornate shokko, but perhaps having it all the same colour will make it an understated feature that you only notice up close, instead of competing for attention with the dodai.