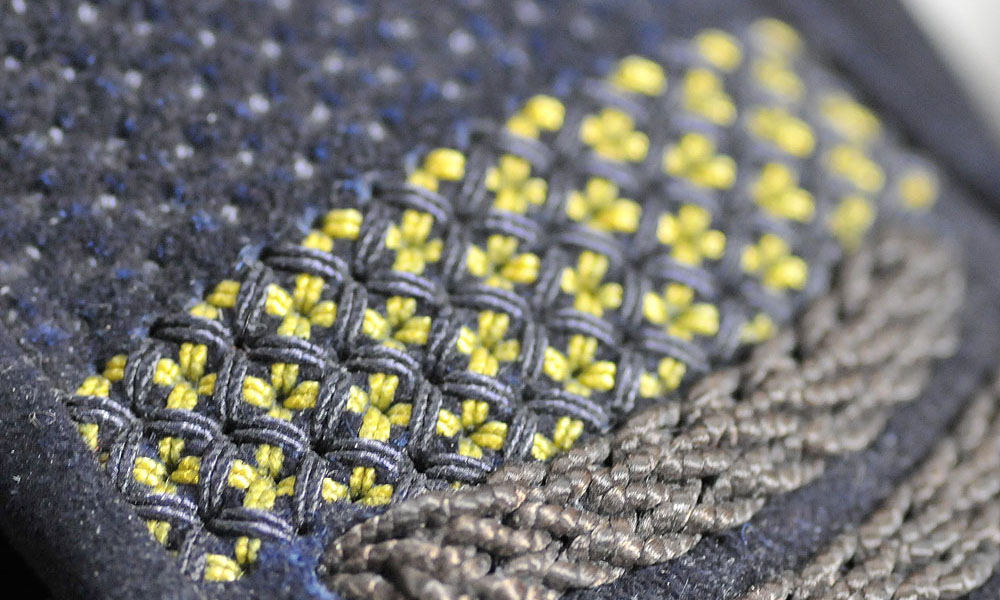 When looking at Kendo Bogu, whether it is online or in catalogs, you often see the word “Shokko” in the description of the Bogu. Shokko is part of the Kazari decoration on the Ago and on the Mune, and in general, most people thinks that it’s a name of the decorative patterns used for Bogu, although the concept of the word “Shokko” itself is rather vague. This time we will take a closer look at “Shokko”.

“Shokko” is originally the name of brocades from the state of Shu during the three kingdoms era in China.

In Japan, we have many traditional patterns that have been passed down through the ages. In normal life, they have already become so common, so that many might take them for granted and don’t really think about it. Such patterns such as Kikko (tortoise), Kanoko (the child of a deer) and Karakusa (arabesque) patterns are good examples of such patterns.

Actually “Shokko” is also such an traditional pattern. Historically during the Three Kingdoms era in China, the state of Shu (the current Sichuan province) were very famous for their brocaded fabrics. This was because there was supposedly a very clean river running through the state of Shu, by which mulberry trees prospered and the silkworms that are these leaves produced very high quality Silk threads that was used to brocade beautiful fabrics.

Part of these brocaded fabrics crossed the sea and came to Japan, and thus the people in Japan started calling these brocades Shokko since it came from the river of Shu.

The Shokko pattern was a type of pattern which was often seen on these imported fabrics. It was a type of lattice pattern with brocaded animals or flowers patterns in the center of each of the geometric patterns on the fabric.

High quality Shokko fabrics where held in high esteem and very where a product that nobles would yearn for. Especially the lattice patterned Shokko with brocades of plants and animals was thought to be extra precious and beautiful, and thus became something that was used to make clothing and accessories that was used by people of high status in the society. Eventually the pattern evolved into featuring octagons surrounded by quadrats which became a new standard.

I think you already understand, but “Shokko” was originally the name of the fabric itself, but with time it changed and came to refer to the specific pattern of the fabric instead. This is why “Shokko” is originally written with the characters “蜀江”(the river of Shu) and refers to the pattern of octagons surrounded by quadrants with different patterns brocaded inside of these geometric patterns. However in terms of Bogu, you use thread to form the pattern, so it seems it’s more often written as “蜀紅” (the second character means “crimson” which one of the colors often used for Shokko decoration in Bogu).

Why did Shokko patterns start being used on Bogu? So now we understand what “Shokko” actually means, but that doesn’t explain why Shokko started to be used on Bogu. What is the story behind that? It goes without saying that the predecessor of the modern Kendo Bogu was the Yoroi armors and helmets worn by the Samurai warriors. If you take a closer look, you will see that armors from the Nara era used brocaded fabrics inside for decoration and some extra protection.

In fact, when examining old samurai armors, you can see that brocaded fabrics where actually used in many places both on the inside and on the outside of the armor. It seems that due to the fact that Shokko patterned fabric was very prestigious, such patterned fabrics eventually became widely used to decorate the armors of samurai warriors also. When looking in old materials depicting old armors, I was able to find pictures of a “Tsuruhashiri”, the part corresponding the Do a modern Kendo Bogu ando n these pictures you could clearly see that the Tsuruhashiri was completely covered in a Shokko pattern. The reason Shokko is used for Bogu today, has to do with the historical usage of Shokko for Yoroi armors.

How do you know if the quality of the Shokko on a Bogu is good?

The most important factor of the Shokko on a Bogu is if it’s properly sewn or not. The Mune and the Tsukidare (Ago) are parts that are supposed to protect you from the Tsuki attacks from your opponent, so if the structure is bad, it will not be able to fulfill its purpose of protecting you. To add decorative Shokko patterns to your Mune or Ago is not simply about making your Bogu fancier, but it also has the purpose of making the structure of your Bogu more durable.

The Mune and Ago are made by putting a hard core padding in between two pieces of leather, and by adding a Shokko pattern, which is meticulously stitched through all layers, it compresses the core padding and becomes harder. Also the unevenness created by the pattern on the Ago and Mune will work as a anti-slip pattern that properly stops the Shinai and prevents it from going astray. If there was no Shokko pattern on the Ago, the chances of the Tsuki slipping and going past the Ago and straight into your throat would be much higher!

Please look very carefully at the pattern of the Shokko, if each tread is sunken into the leather and it creates an uneven surface where the threats creates small indents in the leather, you can say that the Mune or Ago have been properly stitched. This is a proof of the craftsman using quite a bit of strength to pull the thread making it as tight as possible when they made the Bogu. This is one of the ways  of seeing if the Bogu have been properly stitched or not.