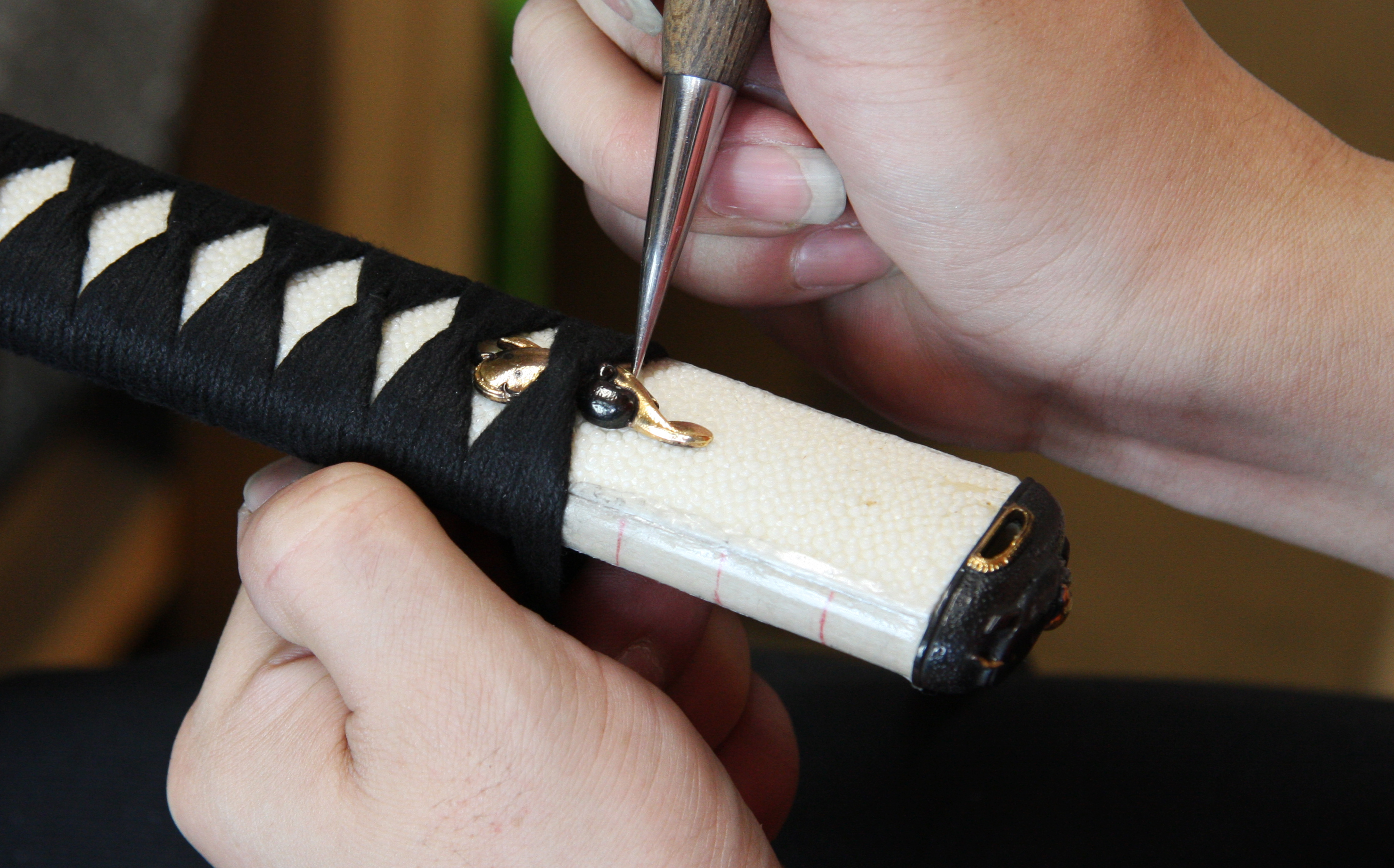 From shinken to iaito and decorative wall-hangers, there are numerous types of Japanese swords available for purchase today, however today we will have a look at the only part that you touch on a katana: the tsuka. We will also go over some simple ways to distinguish a good tsuka from a bad one.

Is the Tsuka-ito wrapped firmly?

A tsuka is wrapped with tsuka-ito, which can be made with fabric string or with leather strings. If the tsuka-ito moves and seems like it will come off only by touching it, you better watch be careful. The tsuka-ito should not be moving if you touch it or even try to push/pull it.  Especially not if the sword is new, although with time the tsuka-ito might become slightly loose through wear and tear from use.

A properly wrapped tsuka will not have any level difference in-between the tsuka-ito and the fuchi/kashira. If there is a large bump caused by the tsuka-ito, it might mean that the tsuka-ito haven’t been properly stretched when it was wrapped onto the tsuka. Not only does it look bad, but it also affects the grip when you hold the tsuka. Which is why, if you see such a tsuka, it should be avoided.

Is the tsuka properly wrapped so that there is a front and a backside?

Katana have defined front and back sides, called “sashi-omote”(the “front side” when the sword is sheathed) and “sashi-ura” (the “back side” when the sword is sheathed). In the art of tsuka-maki (tsuka wrapping) there is a rule that says that the wrapping on the front-side must start with an “ichimonji”, meaning a straight line. Besides for certain koryu styles, such as the Yagyu-style tsuka, the front will definitely start with the tsuka-ito forming a straight line.

Make sure that the diamonds are uniform

The tsuka is wrapped with a single tsuka-ito, which is supposed to be wrapped while alternating the top and bottom tsuka-ito at each fold, meaning that if the first diamond fold is wrapped with the left tsuka-ito on top, on the next diamond fold it should be at the bottom. In some cases you might see tsuka that are wrapped in the way so that the same tsuka-ito is always on the top, but beware as this is an incorrectly wrapped tsuka. Please compare the pictures below to see the difference.

Confirm that the direction of the menuki is correct

Menuki have a proper direction and tenchi (top/bottom) which should be correctly mounted on the tsuka before it’s wrapped. Having the tenchi (top and the bottom part) of the menuki reversed is unthinkable and demosntrates a total lack of skill and understanding on the part of the craftsman. Although there are no specific rules, the craftsmen needs to take into consideration how the menuki will look when the sword it’s sheathed and hangs from the waist of the practitioner, having a menuki that looks like it has been reversed in this position will affect the appearance of the user.

For animal type menuki: The head or body (in case the animal is facing one direction, but the head is turned around to face the other direction) of the animal should be in the direction of the fuchigane.

For plant type menuki: The roots or the stem should be in the direction of the fuchigane.

This is the general rules for when mounting menuki. If the menuki is mounted in reverse, it’s called “nige-menuki” (a menuki that runs away), and this was very disliked by the samurai as it would imply that they would rather run away than battle to the death. Of course, for menuki that depict geometrical shapes or non-organic objects for example, these rules might not always apply.

In many ways, the tsuka is an important factor to the appearance of a sword. If the tsuka is not made properly it will result in a less dignified appearance of the user, and also practically hinder his progress as a martial artist. If you look out for the points above, you should be able to tell a good tsuka apart from a bad one to a certain extent. So please use this guide as a reference when you buy your next sword.

Having said this, no matter how good the tsuka has been wrapped, if you use it incorrectly, any effort on choosing a sword with a properly wrapped tsuka will be wasted.

Do not leave everything to your strength, you need to have a proper tenouchi when you grip your sword. This being said, the tsuka will also last longer, and when your tsuka becomes damaged or loosens even though you have used it the correct way, please do not continue using it and consider to ask to have it re-wrapped.

We craftsmen need to do our best to keep the users safe by making products that are safe to use. However I think that the user also has a responsibility to practice common sense, and should not continue to use something that has already been compromised in some way.