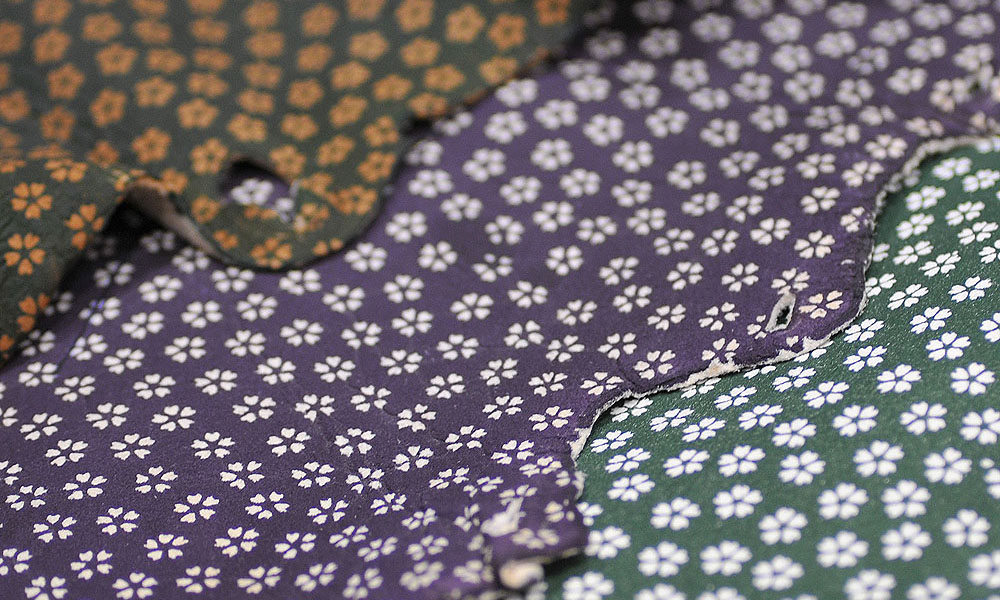 In the last article about Shokko, we spoke about the Shokko patterns on the Mune and Ago on the Bogu. This time we are going to take a closer look at the patterns which most Kendo practitioners are familiar with, such as “Kozakura” (Cherry blossom) and “Shobu” (Japanese Iris) patterns.

You might think, “Where do you use Shobu patterns in Kendo?”  Please think about your Shinai Bag, some people in your Dojo might have a Shinai bag with a green color and white patterns. In that pattern, there should be a white cross visible in the center, with three thin lines on each side of the cross. It’s a pattern that is often used in Kendo and most people probably haven’t even stopped to think about it, but this is what we call the Shobu pattern. The design is a bit misleading, but the cross actually symbolizes the flower while the lines besides it symbolizes its leaves.

On the other hand, the Kozakura pattern is often seen on the back of Tare or Men, it’s the flower pattern with a flower with five petals. Some of you readers might even come to the sudden realization that this was supposed to depict Sakura flowers.

Both Shobu and Kozakura are patterns that are so often seen in the world of Kendo that most people probably don’t really understand the meaning behind them.

Both the Shobu and Kozakura patterns were traditional patterns worn by the Samurai and warriors in Japan. The patterns have also been historically used in Bogu since the Heian period. It was first used on the dyed leather reinforcements on the Yoroi armors or helmets worn by the Samurai. The Kozakura pattern has been found to be used on the Kusazuri, a part which would correspond to the Tare on a modern Bogu, while the part where the Do and Mune is joined and also the Keshouita (shoulder armor pads) were decorated with the Shobu pattern. Even before that, during the Nara era, patterns that imitated Chinese patterns where commonplace on the dyed leather reinforcements. Both the Shobu and the Kozakura patterns come from a period when Japan’s unique culture flourished and are patterns chosen based on the aesthetic sense of the Japanese people.

Shobu symbolizes militarism (strength) and victory, which is why it was preferred as a decorative pattern on armors of warriors. In fact, if you look at the armors, helmets, Tsuba of the Katana or horse saddles, that have been preserved and can still be studied, you will find that most of them are decorated with the Shobu pattern. 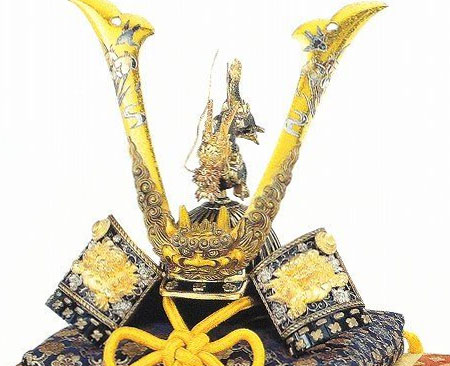 In Japan, it’s also because of this that on the Children’s day on the 5th of May, there is a custom of decorating with Japanese Iris and display armors, as a wish for the children to become strong. It’s a Japanese play on words, but to the warriors who spent their days betting their lives on the battlefield it was an important lucky charm.

At first glance, you might think Sakura is a feminine pattern

How about Kozakura? If someone told you that this pattern was preferred by the Samurai, you might feel a bit confused. After all, the pale short-lived pinkish petals gives of a feminine feeling and the cherry blossoms are far from the image of the though Samurai. 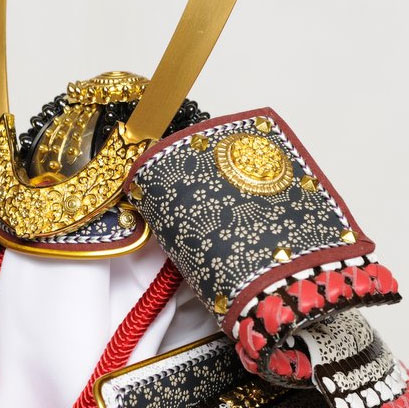 Furthermore, the Sakura blossoms have long been loved by the Japanese people, however, during the Heian era there was a superstitious belief that plagues spread when Sakura blossom falls, making many people dislike it. First and foremost, the fact that it would start falling rather quickly, was seen as being very ominous.

Why did such a flower become a pattern preferred by Samurai, and how did it survive to the present times to be used in our Bogus?

While it’s true that Sakura blossoms has a very short life-time and will scatter rather quickly, this fact is also why it was loved by Samurai. Since the Sakura blooms brilliantly and resolutely scatters afterwards, it came to symbolize the way of living of the Samurai.

To always fight as your life depends on it and when you lose, rather than falling into the hands of your enemies you would willingly choose to die. When you live, you live brilliantly with all your might and when you die, you die quietly and resolutely, without any lingering attachment to life. 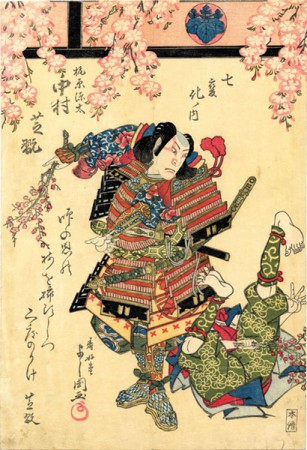 The Sakura will bloom and be in its full glory for a very short time, after which it will ungrudgingly scatter. The Sakura is thus the symbol of the concept of Bushido, which is why it had been loved by the Samurai since times immemorial.

This is why Sakura was a common theme used on armors, the Tsuba, and also horse saddles historically.

To use the fearless courage of the Sakura as a metaphor is something that was passed down from the concept of Bushido into modern times. If you think about it like this, you will understand how appropriate the Kozakura pattern actually is for decorating our Kendo Bogu.