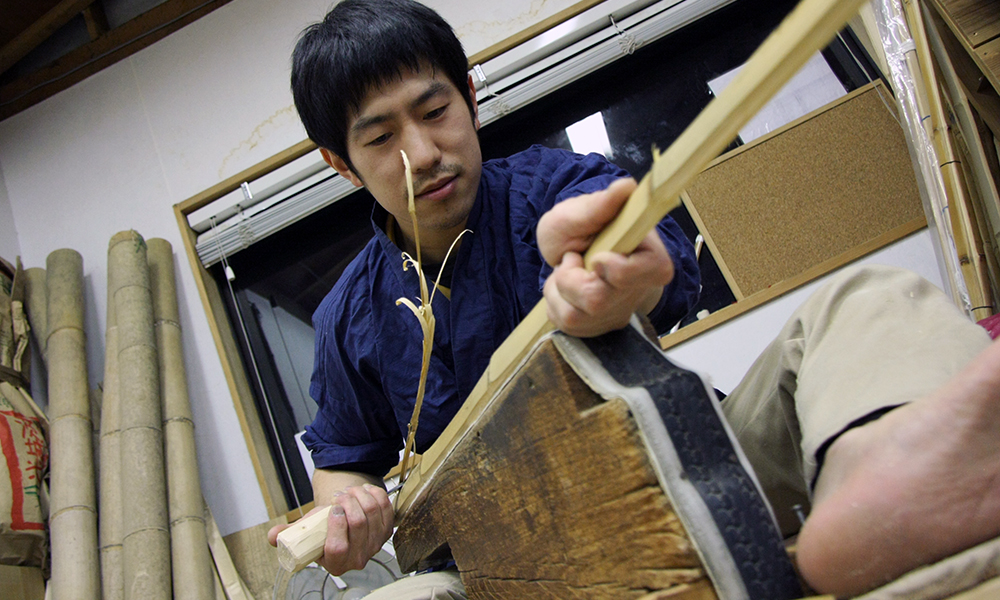 You don’t make the shinai according to specific measurements

Morishita Shozo-san points this out when referring to a blog entitled “A Teacher aiming to become a Kendo Athlete”. Morishita-san was born in a house of a judo wear sewer, but shifted to making kendo equipment. He learned under artisans such as Hirooki Saegusa, and has made kendo equipment for over 60 years.

It was probably written by a kendo instructor. It mentions that the length of the shinai in the past used to be ‘80-90-120-80’. This referred to the radius in millimetres at the end of the tsuka, where the right hand is place, the bulge of the bamboo, and the sword’s tip. It also mentions that a good shinai is one in which ‘all the knuckles are aligned and is made from 4 staves taken from the same bamboo plant’.

Apparently, someone who read this blog post went to a shinai maker, whom Morishita-san knows, and ordered one with the “80-90-120-80” specifications; even specifying the core down to the millimetre as well as the number of knuckles and their positions.

“When someone specifies not only the weight, but the position of the core and the radius of each part, I can’t help but ask “How am I supposed to make that?” It is nearly impossible to make a shinai to that level of specification, even if we searched an entire mountain of bamboo trees. In the world of tea making; there is a custom where one would enter a bamboo grove with one’s master to make a specially designated tea ladle. If we take that example, such a specification would multiply the cost by 100-fold, and even with a relatively cheap shinai it would probably cost more than 200,000 or even 300,000 yen. I hope people can understand this.”

“The shinai usually has a fixed radius at the tsuka and is made based on that foundation. Often people would measure it by using a tape, but then measuring each part in the middle is uncommon. Shinai artisans have always traditionally spoken of their shinai in terms of “shaku” and “sun”, never in millimetres.”

Presently, there are fewer and fewer artisans making shinai, perhaps fewer than 10. When a reporter interviewed one of the few remaining shinai artisans, Yamaguchi Toshiaki-san from Shiga, in 2017, this is what he said:

“Recently we get more and more orders specifying the millimetres of the bottom of the tsuka, the tsuba line, and the knuckles. We know that retailers are simply relaying customer requests to us, but we as shinai artisans do not work with a vernier micrometer. If we make the shinai according to these specifications, we cannot control the weight.

Regarding the idea that a “5 knuckle shinai is ideal”, Morishita-san has this to say:

“The 5-knuckle thing comes from Confucius in China who gave meaning to the knuckles, and Uesugi Kenshin in the Sengoku era applied that. This is where the tradition of the 5-knuckles comes from. But in old times they used to cut bamboo with hatchets, so they were able to get a lot of the bamboo close to its root, but nowadays they use sanding machines and they cut further above the root, so the blade does not break. This is why it has become increasingly difficult to get a 5-knuckle bamboo for shinai.”

Regarding the claim that a shinai made from 4 staves of the same bamboo is ideal, Morishita-san doubts this because you can actually get 6 staves from most bamboo plants. What do you do with the remaining two? Throw them away?

“There are no bamboo plants which have all their knuckles straight and aligned. Also, bamboos are elliptically shaped. Even if you use the same part from the same bamboo, the strength of those parts differ depending on the sunlight it receives or how the wind has blown against it. This means even if one can find 4 pieces to make a shinai where all the lines are lined up, you will get a shinai with parts that have differing strengths and curvature. Bamboo is a natural material, and each piece is different. The weather also effects how much water it has absorbed and how heavy it is. The shinai is made from such natural materials.”

Furthermore, the quality of bamboo is decreasing recently.  Past bamboo used to be thin and hard. This means that a large portion of the bamboo was hard, but recently there are many soft parts. Yamaguchi-san says it may be due to global warming or the decaying of bamboo forests, or because of wild boars destroying them.

The bamboo ordered for making shinai has an awful lot of variation in the knuckles and strength.

To be continued to the next volume