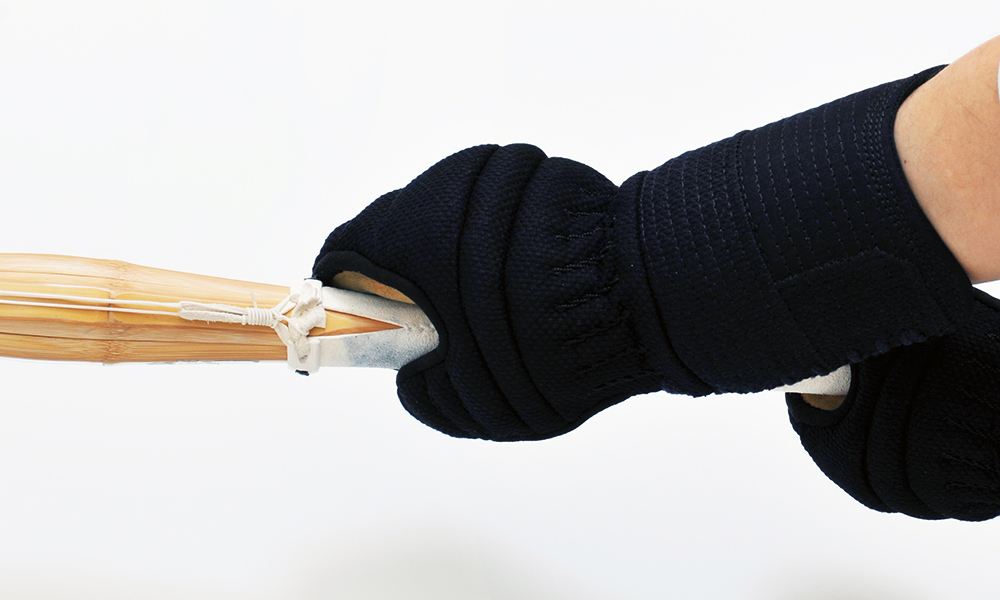 Kote with low impact absorption not only hurt, but can cause serious injury.

What are good quality Kendo kote? Many people will give answers like “You can move your wrists easily.”, “soft”, “easy to use” or “light”. Those are obviously points demanded by players, but Morishita-san, who learned under artisans such as Hiroki Saegusa, and has made kendo equipment for over 60 years; stresses that the most fundamental property is that they protect you from hurt and from injury.

What are good quality Kendo kote? Many people will give answers like “You can move your wrists easily.”, “soft”, “easy to use” or “light”. Those are obviously points demanded by players, but Morishita-san, who learned under artisans such as Hiroki Saegusa, and has made kendo equipment for over 60 years; stresses that the most fundamental property is that they protect you from hurt and from injury.

The Kote consist of the atama ( the ‘head’ of the glove), namako (also called the ‘kera’, the part between the glove head and the futon), the main futon area, and the forearm area. Some gloves don’t have a namako, whilst others have up to two namako. Traditionally, core material as well as deer hair has been put inside the atama, the namako, and the fore-arm area to absorb strikes from shinai. However, recently there are many gloves that lack deer hair.

“Deer hair has a cavity inside it, like a straw. It is also used in special brushes made for Yuzen dye. This quality helps it to absorb impacts and also wicks and then releases sweat. Extra deer hair is put inside the kote, knowing it will deform. After a while, the straw-like area will compress around the shape of your hand and it will become easier to move your hand. When you use different materials for the core just because they are light or cheap, it robs the gloves of their ability to absorb impacts, the very basic element of this protective equipment.”

Morishita-san stresses that pressure absorption should be a priority especially for beginners and junior players, and this goes for all equipment. He says those who have played for a long time may not feel the pain or think it is just part of the game, or may think that it is better to win even with the pain. But beginners, or young kenshi who have just taken up kendo, may decide to quit kendo because it is too painful. This will cause a decline in kendo population.”

“The length of the fore-arm protection has become shorter too. When people ask me to make it shorter, I tell them that it will hurt when you get hit, but they say if it’s shorter there is less chance of it being an ippon. And I think, “Is this really ok?” Those making equipment and those using it both seem to only think about what is ahead of them, like ‘Make it lighter.’ or ‘I want my wrists to move easily’.”

The fore-arm is an area that is exposed and easy to hit. If the futon covering that part is small, of course it is difficult to strike. To make that area smaller is like each team making their goal smaller in a soccer match.

Currently, the “Shinai and Kendo Equipment Rules” approved by the All Japan Kendo Federation specify the upper and lower limit of the length, but in reality makers are making them according to customer demands and these regulations are hardly kept.

If this continues there may be a need for penalties or bans against players using gloves that are too short. It is natural for those fighting at the top to think of ways to not get hit.

“But if equipment based on such specific demands make their way into the general playing population, and even to beginners, it is very dangerous. In training among beginners, if the kote strike misses; it hurts. Those aiming for the strike may show hesitation”, warns Morishita-san.

To be continued to the next volume