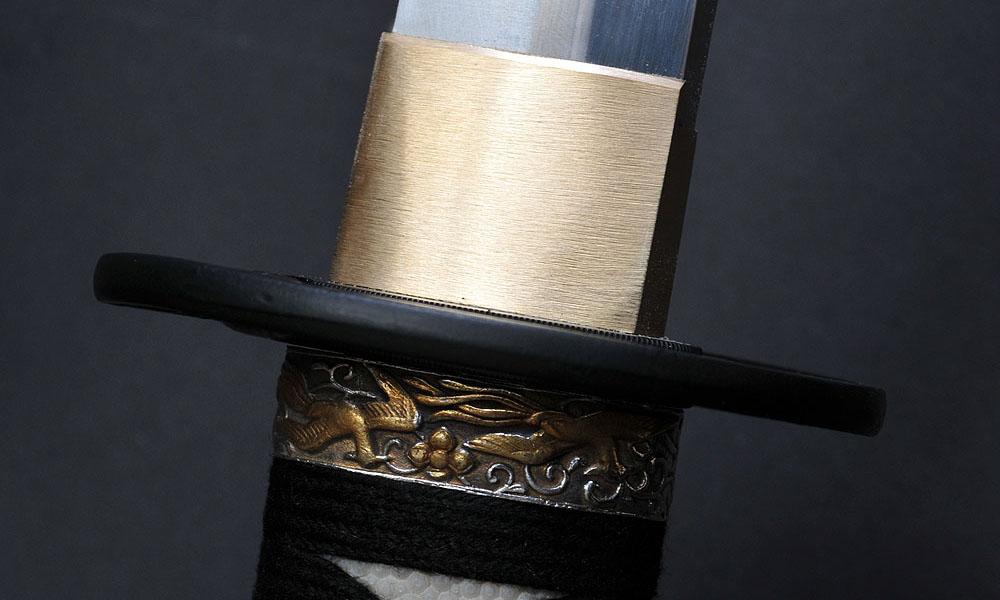 Many roads passed through the ancient capital of Kyoto, for example the Tokaido, Sanyodo and Hokurikudo roads. The most important 7 main roads on which you could enter and leave Kyoto, in other words check points, were called Kyo no Nanakuchi(the seven entrances of Kyoto). Even to this day there are train stations and locations which reminds us of this history, such as Kuramaguchi and Tanbaguchi.

Among those seven entrances, there was one called Awataguchi, nowadays it would be somewhere located close to the Higashiyama-Sanjo, or Sanjo Keihan Station area. Anyone who has studied a bit about Japanese swords would recognize Awataguchi as the area from where the Awataguchi style sword school originates from. The Awataguchi school was active in the Awataguchi area of Kyoto during the first part of the Kamakura era until somewhere in the middle Kamakura era and has been hailed for centuries to be one of the brightest lights in the world of Japanese swords.

But the Awataguchi school was not the only famous swordsmith school in Kyoto, during this period, there was also the Rai school, Ayanokoji school, Umetada school and Horikawa School among many others, making Kyoto a true mecca for sword making at the time. Although many swordsmith schools were founded and prospered in Kyoto, most of them were lost due to the passage of time, and today, even though some schools still exists, none of them make swords in Kyoto today.

An Iaito is a Japanese sword that is made from a non-steel based alloy, used for practicing Iaido. Most of the Iaito swords on the market nowadays are made in Gifu prefecture, who are famous for their craftsmanship when it comes to Japanese swords.

In fact, some of the Iaito swords sold by Tozando are also made by craftsmen in our OEM workshop in Gifu prefecture. However, because of the historical background of Yamashiro tradition sword making in Kyoto and the history of craftsmanship in the Nishijin area in Kyoto where the headquarters of Tozando is located, perhaps it could be said that Tozando was fated to make Iaito in Kyoto. As a matter of course, we received many requests calling for a “Yamashiro renaissance”, a revival of swords made in Kyoto from our customers.

To answer these calls, Tozando started a huge project in the name of reviving the sword making crafts in Kyoto. We didn’t only want to simply assemble the swords in Kyoto, but we started with making the sword from scratch, choosing the highest quality materials to produce a truly “made in Kyoto” product.

Starting with the blade, our first condition when making the blade was that it would be an Iaito blade, but feel like a Shinken blade. In our efforts to develop such a blade we tried making alloys using many different combinations of materials and through trial and error, we were at last able to create a blade which is able to satisfy not only highly ranked Iaidoka, but also Japanese sword enthusiasts, with a weight similar to that of a real Japanese sword and at the same time being highly durable. This is how the special reinforcement GT metal used for the Suzaku series Tozando-made Iaito was born. The special reinforcement GT metal has a superior tensile strength and elasticity compared to other alloys used for Iaito in the past. The specific gravity of GT metal is also rather light and isn’t susceptible to stress corrosion, so it can be said that it is an alloy that is most suitable for making Iaito.

For casting the blade we chose to use the gravity casting method, this is because the sandcasting method used by other manufacturers in the past is actually quite unreliable. When sandcasting a blade you pour the molten metal into a cast made with hardened sand, not only does the result of the sandcasting vary slightly each time due to the sand loosing it’s shape, but also as the metal takes longer to cool, it increases the chances of hidden cavities inside the blade, making it prone to producing defects.

This is why Tozando decided to use a high precision metal cast and use gravity casting for making the Suzaku series Iaito blade. By pouring the molten metal into the metal cast making use of gravity, it’s possible to restrict the flow of air, preventing unwanted air bubbles which causes cavities, and promoting quick cooling and solidification of the blade, which produces an even tougher beautiful sword blade. After painstakingly trying numerous alloys and production methods for two years, we finally were able to see the birth of a truly Kyoto-made Iaito blade. 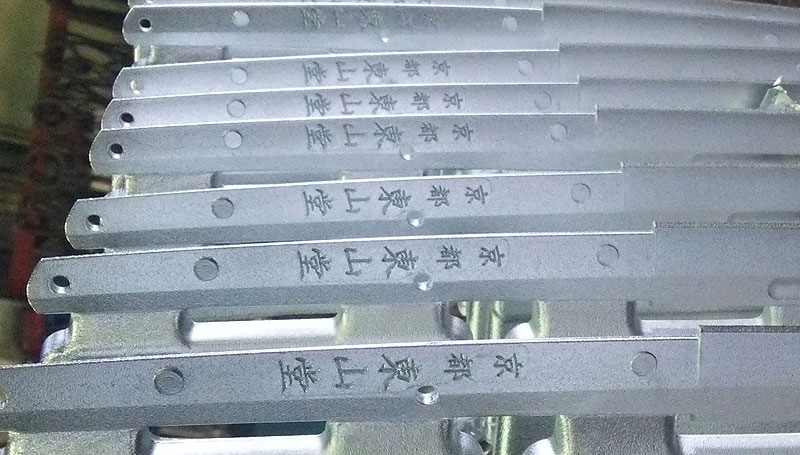 Of course we don’t compromise on the polishing process of the blade either. After the blade has been casted, each blade is meticulously hand-polished by our craftsmen. Considering the work efficiency, there might be more effective ways to rapidly polish each blade by machine, however, by polishing each blade by hand our craftsmen can bring out the most of the individual personalities and details of each blade and remove any defective products, leaving only the highest quality blades to be used for making Iaito. 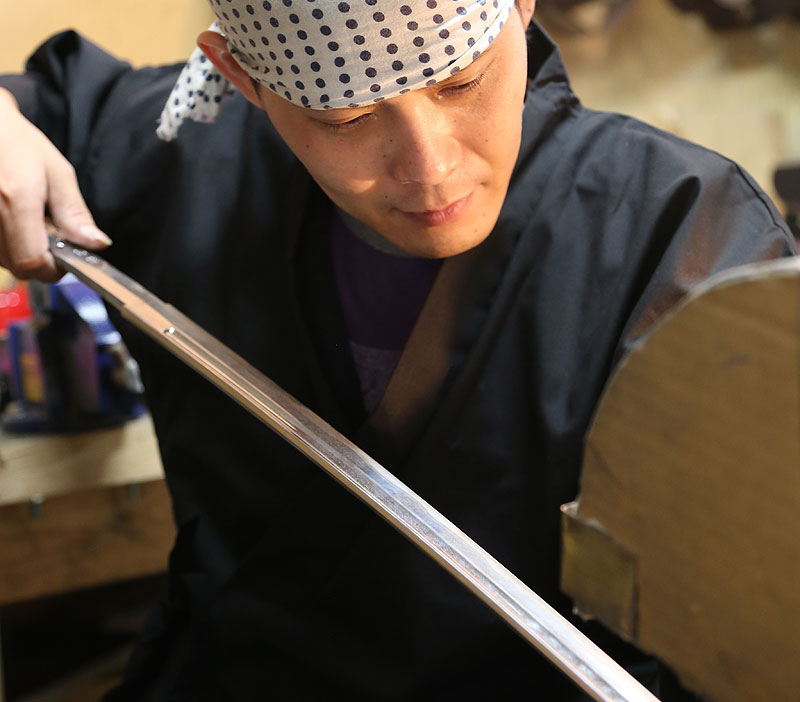 The Hi-groove that greatly affects the sound and feedback of the Iaito is also carved by hand. One of the big differences between a conventional Iaito blade and the Iaito blade for the Suzaku series is the shape of the hi-groove. Up until now all Iaito blades had a hi-groove that are tapered in both end of the groove to save time during the polishing process. However, no matter which reference book you look in you won’t find any authentic Japanese swords who has a groove with such a shape, so even though it takes more than twice the effort and time, we decided to use a more realistic Marudome Hi-groove with a Shinken Hi for our blade. Among all the available Iaito on the market today only the Suzaku series has this kind of Shinken Hi-groove by default, this might be why the Suzaku Iaito looks and feels like an authentic Japanese sword at first glance, a result of the effort put into making the blade by our craftsmen.

The Habaki is one of the most important and characteristic metallic parts in a Japanese sword. As such, the Habaki on the Suzaku series Iaito is also made by hand in Kyoto. We chose to use brass as the material because of its durability and elegant appearance and due to the delicate nature of this part, we decided to use our proprietary cast to make it at our workshop, making it a perfect match to our durable Suzaku series Iaito blade.

In addition to the sword, the Tsuka wrapping also is a good sign to tell the overall quality of a Japanese sword, and of course, we didn’t compromise on this part either. To make sure that the Tsuka wrapping is made as authentic and durable as possible, our craftsmen personally went to one of the few remaining Tsuka wrapping craftsmen in Kyoto to learn and inherit the traditional art of Tsuka wrapping. When it comes to cheap Iaito, some of the common problems are that the front-side and back side of the Tsuka wrapping is mixed up, that the diamond shapes on the Tsuka are not constantly shaped or that the wrapping string is not alternated (please refer to the article about good and bad Tsuka for more information). 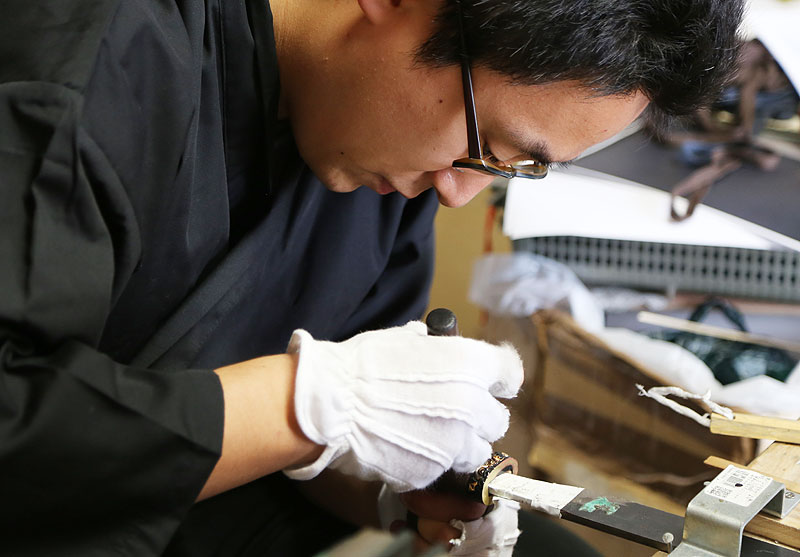 In many ways, the Tsuka is an important factor to the appearance of a sword. If the Tsuka is not made properly it will result in a less dignified appearance of the user, and also practically hinder his progress as a martial artist. That’s why our craftsmen has put in a lot of effort to provide Tsuka with traditional and authentic Tsuka-maki. It also goes without saying that the Tsuka-ito used for wrapping the Tsuka is also made in Kyoto.

In this way almost all parts of the Suzaku series Iaito are made in Kyoto, each and every part reflecting the spirit of craftsmanship that Kyoto is known for. As our craftsmen are also highly ranked Iaido practitioners, they do not only look at each sword as craftsmen, but also as Iaido practitioners, ensuring the highest quality by testing each sword before shipping them to the customer. This is why each sword has a serial number carved on the Nakago to ensure the quality of each batch of sword blades, infusing them with the soul and pride of the craftsmen. Even Mr. Kuwano Toshiro who is a well-known master Saya craftsman who have experiences with handling national treasure class swords, praised the Suzaku Iaito, saying that it was “very well done and praiseworthy”.

Lastly, when it came to naming this new Iaito series, we decided to draw inspiration from the history of Kyoto.  Suzaku, or the vermillion bird, is the guardian beast of the south area of Kyoto and represents the element of fire. It’s also said to be undying, having the ability to be reborn in fire, representing a never yielding will. When thinking about the long road of trial and error leading to the commercialization of the Suzaku series Iaito, and wishing to pass on the mind of “never giving up” to the users of this sword, we decided to name it after the vermilion bird, Suzaku. Actually, the Nishijin area where the Tozando headquarters are located is adjacent to the Senbon Road, one of the main roads in Kyoto that stretches from the north to the south of Kyoto.

In the Heian era, this road was actually called the “Suzaku main road” which ran from the Suzakumon gate to the Rashomon gate at the southern end of the city, being the main road for traveling north to south in Kyoto. Today the gates are long gone, but it makes you wonder if the fact that the craft of making swords in Kyoto would be resurrected in this area by Tozando is really a mere coincidence.