“Japanese oak” is a collection of evergreen tall trees, from which long oval green leaves with an elegant luster and uneven edges grow. The Japanese oak is native to many countries in Asia, including Japan, China, Korea, Thailand and Vietnam, having more than 150 varieties. In Japan, the trees can commonly be found in the areas south of the Kanto area. 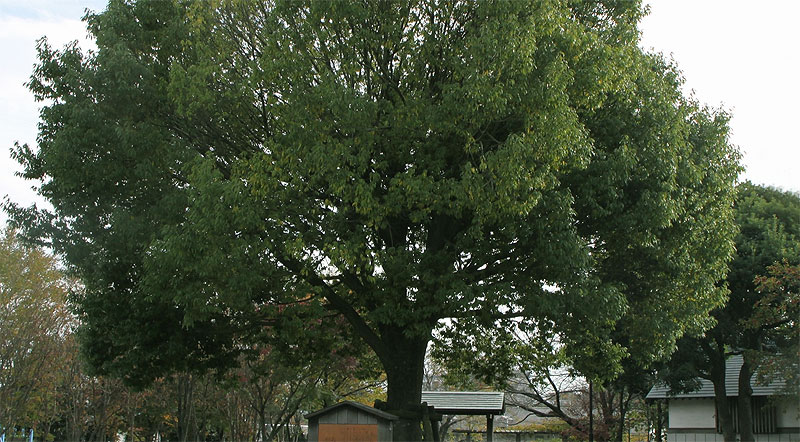 In Japanese the word “Oak” (樫) is written with the radicals for “wood” (木) and “hard” (堅), this tells the story of how hard Japanese oak wood is. Even though it is a strong hard wood, it is also very resilient, which makes it very durable. Because of this Japanese oak wood has been used since ancient times to make daily life tools such as hammers and hoes and also Japanese Taiko drums and canes amongst other things. On the other hand, the wood is very hard to dry and process due to its toughness. As the trees are ever green they don’t burn very easily, and is thus often used as privacy plants and wind breaking plants.

Japanese White Oak (白樫; Shirakashi) can mostly be found in the mid-southern parts of Japan, in the Shikoku and Kyushu regions. As with its relative, Ichiikashi(一位樫), better known as the Japanese Red Oak (赤樫; Akagashi), it is a very hard and heavy wood with high resilience and durability. When mentioning “Kashi” (Oak) in the Kanto region most people refer to the Japanese white oak tree, and it’s often found in temples and shrine grounds. The name “white oak” comes from the fact that the cross-section of the wood looks white just after being cut, and in Japan it’s seen as a tree that auspicious tree and is a familiar existence to the Japanese people.

In Budo it’s usually use to make wooden weapons such as Bokken, Jo, Bo and so on. Since it is heavy and very resilient, it’s one of the most favored woods to use for contact-practice and Suburi, along with Kata when doing Keiko in Budo. Starting with Miyamoto Musashi, Japanese white oak was the favorite wood to use for wooden weapons of a lot of famous sword masters throughout Japanese history, because of its practicality and high durability. When comparing Japanese White Oak to Japanese Red Oak, white oak is harder and does not break as easily as it has denser grains which also makes it slightly heavier and more preferable as material for Bokken. However, compared to Japanese red oak, the white oak splinters slightly more, which can be said to be one of its weak points.