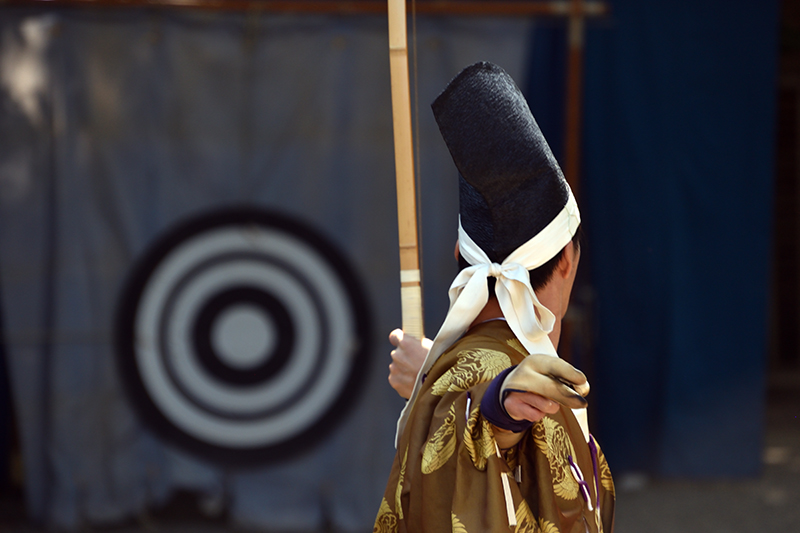 In kyudo, there is a concept called the “8 Phases of Shooting”. This concept divides the movement for releasing the arrow into 8 phases; each phase has its own name. The last phase that brings the movements to a close is called “zanshin”. The kanji is usually written in mean “remaining heart”, this is referring to one’s mentality.

It can also be written as “remaining body” relating to one’s posture. In kyudo, even after you have shot the arrow you must not leave the place, but instead maintain your posture, and keep your eyes fixed on where the arrow hits. You must sustain your spiritual awareness until you leave the shooting area. This is what “zanshin” is.

As you can see, “zanshin” is an important factor in Japan’s many martial and performative arts: it is a spiritual concept that also has a profound influence on the Japanese people’s sense of beauty. Zanshin in martial arts is to not let your guard down, even after executing your moves. It is to stay prepared both mentally and physically so you can adapt to any counterattacks your enemy might respond with or subsequent changes in the situation.

In a real battle, even if your opponent appears to have completely lost any ability to fight or mount resistance, that could be fake, and they could counter as soon as you let down your guard. The concept is that there is never a complete end to the battle without zanshin. Staying aware mentally without letting your guard down is something seen in the performing arts of Noh and Kabuki as well.

If we look at other martial arts; in kendo, after executing a strike you must maintain your posture with awareness of your opponent’s potential attacks or counters so you can respond accordingly. That is called “zanshin”. Without zanshin, even a good strike that fulfills all the other criteria for yuko-datotsu will not be awarded ippon. In karate, zanshin is about being ready to counterattack with awareness of your opponent and the surroundings.

In judo, it means to keep your balance even after you execute a throw, moving straight into the next attack including groundwork or body strikes. This means that even after gaining an ippon, if that player is judged to have lost concentration in the heat of the moment, the ippon may be cancelled on grounds that he is too proud or over-confident and lacks “zanshin”.

In Japanese we say “shimatsu ga ii” which means “well-settled”. Even if you begin something well, if the end is not good, it does not count. The idea is that things must stay “beautiful” right until the end. On the other hand, “shimatsu ga warui” (poorly settled) is understood as an abject and embarrassing behavior and condition of the heart. In martial arts, zanshin is about beginning with manners, and until the end one should not become lax nor become arrogant. You should stay humble and be thankful if there is an opponent. Zanshin is about doing this continually.

This kind of condition of the heart can be seen in the lifestyle of Japan from ancient times. For example, the sliding doors known as shoji in a traditionally styled room are to be closed one by one without leaving an echoing sound. Shoes are to be taken off and not simply left there, but put neatly side by side.

In the Japanese tea ceremony, they teach you not to start talking in a loud voice or to close doors loudly or to hurry in cleaning up after the visitor has left. The host is to see off the guests until they cannot be seen anymore, return to the tea ceremony room, make another pot of tea quietly, and reflect upon the one-in-a-lifetime encounter that has just passed (an expression of the famous phrase ichigo-ichie).

In this way, zanshin is found not only inside the dojo, but is something that can be practiced in everyday life. If one is mindful of zanshin regularly in life, she or he will be able to truly discover its meaning in martial arts as well. This affects the way one speaks, the way one expresses their attitude, and also the way one thinks. In zanshin, there may be many opportunities to discover new outlooks in life.