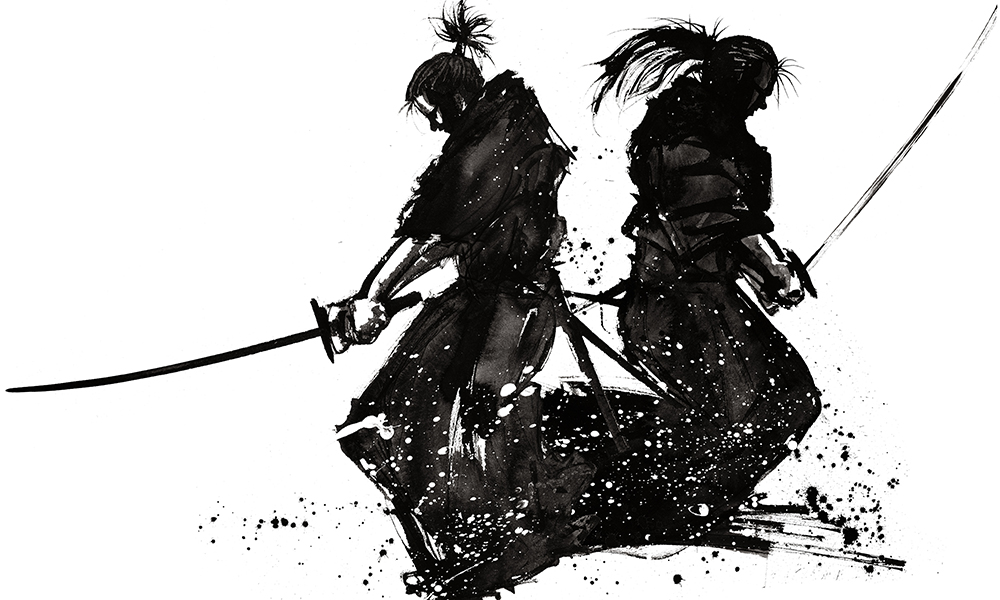 “Miyamoto Musashi” is a novel written by Eiji Yoshikawa that was published as a serial by Asahi Shimbun from 1935 to 1939. Since then it was been made into movies, TV series, and comic books many times, making Musashi a legendary swordsman not only in Japan, but worldwide.

As Musashi traveled around the country training, it is said that the 21-year-old chose the Yoshioka Dojo of Kyoto to test his skills against. Yoshioka Dojo was a famous house of swordsmen, who during the Muromachi era taught kenjutsu and battle tactics to the Shogun’s family.

In the novel, Musashi deliberately arrived late to an arranged duel, apparently irritating Seijuro, who was the head of the Yoshioka Dojo at the time. As his irritation reached its peak, Musashi suddenly appears and proceeds to break Seijuro’s arm with his wooden sword. This is how the famous story unfolds. It is a well-known scene, placed at the climax of movies and theater plays. But, like Sasaki Kojiro, is this Seijuro who has been depicted as Musashi’s rival a real historical person?

According to the “Yoshioka-den” (by Michisuke Fukuzumi), an official record kept by the Yoshioka house published in 1684, the duel was held not in Rendai (now the Norther Ward of Kyoto), but in fact on the premises of the Kyoto Shoshidai, an important public office for the city of Kyoto at the time, between the Yoshioka house and Musashi. In this instance, it is written that Musashi was hit on the forehead and bled severely. It is recorded that there were two judgments, one that the Yoshioka won, and another that it was considered a draw.

The person who actually faced Musashi is named as Yoshioka Naotsuna, who is the fourth heir in line to the Yoshioka house. It is also written that Musashi requested another duel with the Yoshioka house at a later date, and although he was scheduled to face the younger brother Naoshige, it ended in an automatic loss for Musashi as he failed to show up to the designated place on that day.

The kind of swordsmanship taught at the Yoshioka house was called Yoshioka-Ryu, and it is considered one of the Kyohachiryu (eight schools of Kyoto), which were began by Kiichi Hogen during the late Heian period, when he taught the arts of the sword to 8 monks at Kurama Mountain.

When war broke out between the Edo government and the Toyotomi house, comprising the famous Winter and (1614) Summer (1615) Sieges of Osaka, Tokugawa Ieyasu sent messengers through the Kyoto Shoshidai to try and prevent the Yoshioka house from taking the Toyotomi side. However, both Naotsuna and his brother Naoshige sided with Toyotomi and fought inside Osaka-jo castle.

After the castle fell and the Toyotomi house was destroyed, the Yoshioka house showed that they had no intentions of continuing the fight against the Tokugawa shogunate by closing their fighting school located in Imadegawa, throwing away all their swords, moved to Shijo Nishinotoin and opened a new business of textile dyeing.

This was apparently because one of their apprentices, who came from China, was skilled in black dyeing. This business achieved great success, and the Yoshioka dyeing was called “kenpo-zome” and became famous (“kenpo” was one of the titles Naotsuna used in his name).

All this is from the records of the Yoshioka clan, so of course we cannot say that these stories are 100% reliable, but today there are dyers in Kyoto who do kenpo-zome still. So, it is very unlikely that, as written in the novel, the Yoshioka household was forced into complete dissolution by Musashi at the duel held under the pine tree at Ichijoji.

In fact, Eiji Yoshikawa himself spoke about how the image of Miyamoto Musashi in his novel has been spread as though it was historical fact. He is quoted as saying, “This is merely fiction and not fact.” and “I cannot help, but feel responsibility.” The novel of Miyamoto Musashi is great literature, but for the dyers in Kyoto who continue to keep the kenpo-zome traditions of the Yoshioka house alive, they must be view it with a sense of awkwardness.