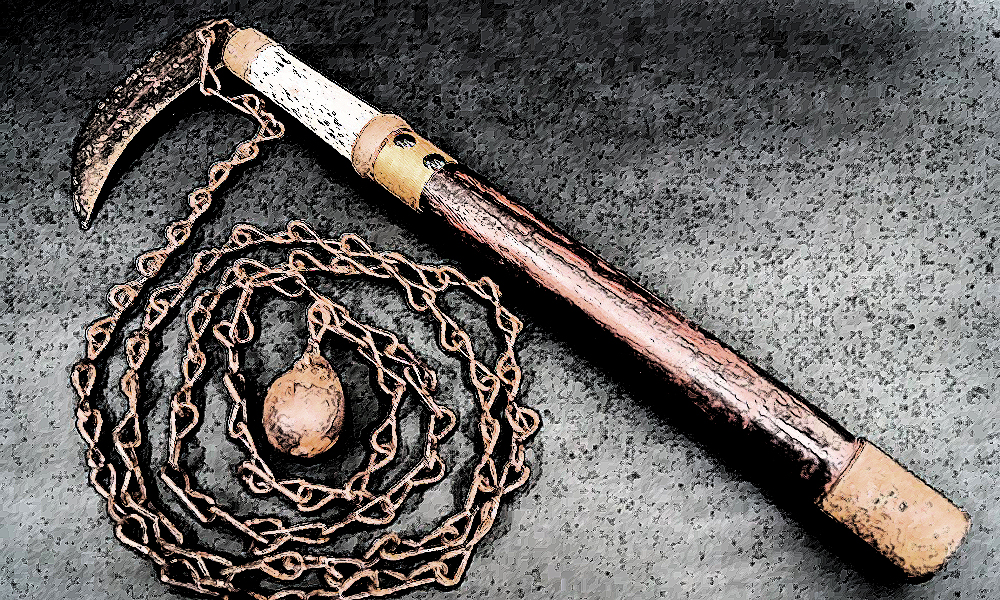 In Japanese ancient martial arts, there are many unique weapons and techniques. Among them, the kusarigama is an especially famous and popular weapon. In Yoshikawa Eiji’s novel Miyamoto Musashi, there is a character named Shishido Baiken who shows a strong personality. And his combat is one of the most famous combat scenes in the theatre and movie along with the Ganryujima duel and the Ichijoji Sagarimatsu battle. This Shishido Baiken is not a historical person but a fictional character invented by Yoshikawa, based on the “Shishido someone” who uses the kusarigama, mentioned in Miyamoto Musashi’s biography Nitenki.

The type where the chains-and-weight are joined to the top of the sickle are made to be used in one hand. In order to lessen the pressure on the wrist, the sickle part is made small and the chains are short so it is easy to swing. The one where the chains are joined to the bottom are made to be used with both hands. The sickle part is bigger and the chains are longer (some even up to 2 meters or 4 meters). Often where there would be a guard around the hilt of the blade so you don’t get injured by the kickback when you throw it or when your opponent successfully grabs the chains.

There are several ways to use the kusarigama. You can aim for your opponent’s head, face, shin or gauntlet, striking him with the chains. You can also aim to dispossess your opponent of his own weapon or wrap the chains around his wrists or feet and limit his movement. After he is caught in the chains, your use the sickle part to deliver the final blow.

Sometime you would hold the weight and throw the sickle part, but unlike the sword, spear, or naginata, you cannot get your own weight behind the sword, so it is often ineffective and takes several tries to deliver a fatal blow. It is not made to be used to close combat, and it last the ability to kill your opponent in one blow compared to other weapons.

In that sense, it makes sense that it was invented by farmers for self-protection with the purpose of containing and restricting the opponent’s movement.